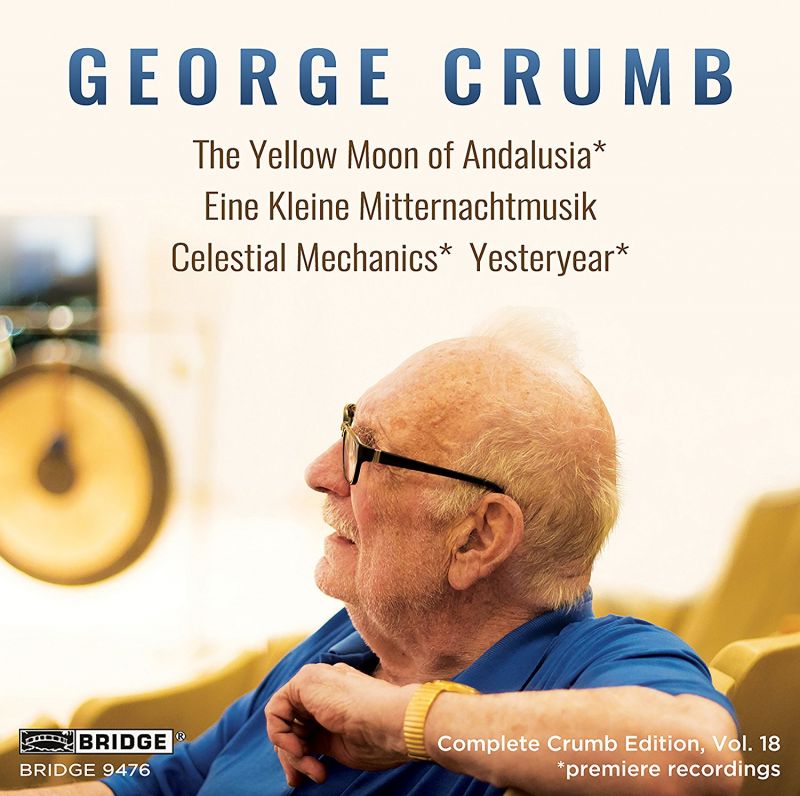 It has been George Crumb’s good fortune to possess both potent genes and a fertile imagination; his myriad beneficiaries include generations of musicians and listeners. Now 88, the American composer continues to explore sonic possibilities in works of surprising and enchanting content, as this recording – Vol 18 in Bridge’s Complete Crumb Edition – illustrates so generously.

Three of the four scores are 21st-century creations, while the fourth, Celestial Mechanics, is the 2012 revised version of a work Crumb composed in 1979. Each piece calls for different vocal and/or instrumental forces, and each shows Crumb’s mastery of tone colour, imagery and ethereal sound worlds. Two works, The Yellow Moon of Andalusia (‘Spanish Songbook III’) and Yesteryear, highlight the composer’s versatile combination of voice and instruments. The former, set to six poems by Federico García Lorca, places mezzo-soprano – or, as performed here, the radiant soprano Tony Arnold – and amplified piano in haunting evocations of the texts, with the singer joining in the instrumental activity on a variety of percussion. In Yesteryear, a quote from François Villon is the catalyst for a glistening vocalise featuring mezzo-soprano (Arnold) with amplified piano and two percussionists.

Thelonious Monk’s ‘’Round Midnight’ was the inspiration for Eine kleine Mitternachtmusik, 10 animated and reflective movements for piano with nods to Debussy, Richard Strauss and others; Marcantonio Barone plays them with exceptional urgency. Perhaps most remarkable is the revised Celestial Mechanics, subtitled ‘Cosmic Dances for Amplied Piano, Four Hands’, which shows Crumb at his most luminously imaginative, and which Quattro Mani (Steven Beck and Susan Grace) perform for all of the score’s mystical beauty.

The Yellow Moon of Andalusia