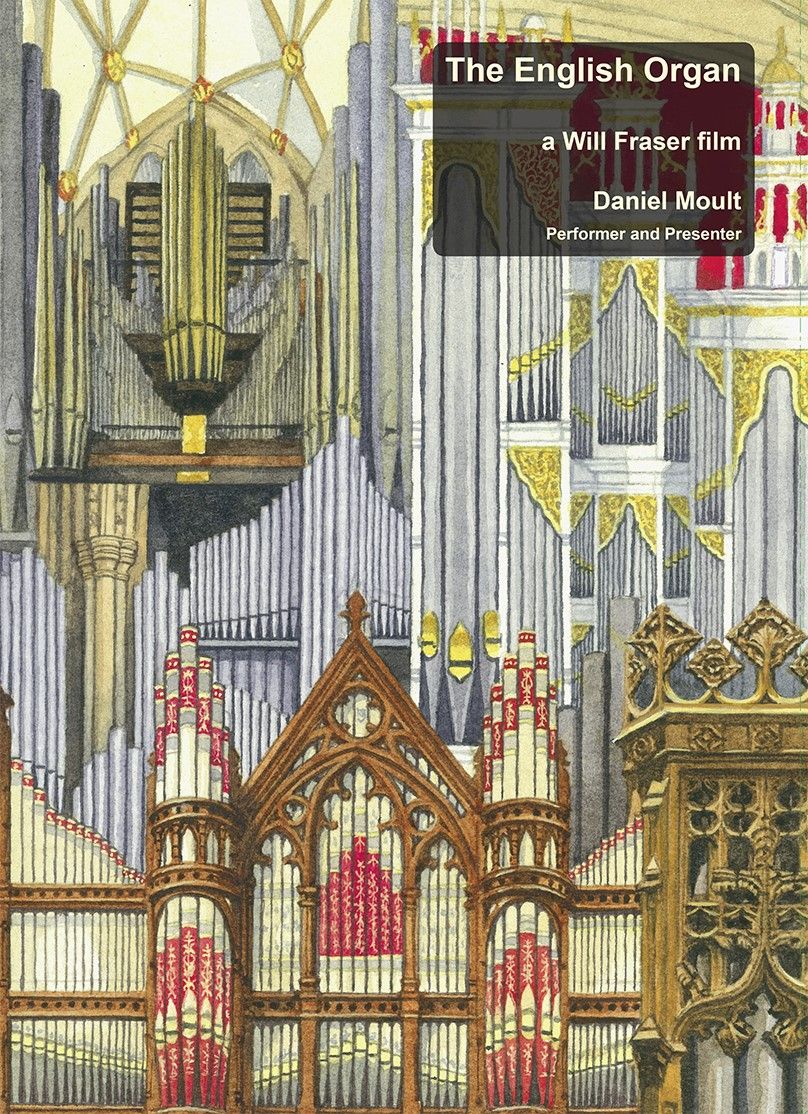 North German organs of the late 17th/early 18th centuries and French organs of the late 19th/early 20th centuries, along with the music written for them, have been so dominant that it has been easy to overlook other national schools of organ building. Few of these has been so undervalued and maligned as the English organ, which may have largely been driven by the unique choral demands of the English church but nevertheless spawned a vast repertory from English organist-composers.

Fugue State Films has turned its lenses and microphones to the English organ with this set of four DVDs and three audio CDs. The first of the DVDs includes three documentary films of 70 minutes each, tracing the development of the English organ from ‘The Long Beginning’ through ‘The Victorian Boom’ to ‘Modernity and Nostalgia’. The remaining three DVDs present stop-by-stop tours of each of the 33 instruments featured in the documentary as well as filmed performances of appropriate repertory. Three audio CDs present further repertory which has possibly less visual impact – Thalben-Ball’s Variations on a Theme by Paganini for Pedals would not seem quite so sensational if you could not see the organist’s feet darting about the pedalboard of Dundee’s Caird Hall. Organ registrations are given in full in a lavishly illustrated booklet.

Guiding us through the convoluted history of the English Organ is Daniel Moult, who does so with all the eagerness of a true enthusiast. You somehow know that after all his clambering around the insides of organs, his joyous talk of wind pressures, pipe scalings, wind trunking and ratcheted swell pedals, a steam train is going to appear somewhere; and so it does (buried deep in the third documentary). However, Moult is no mere enthusiast, but someone with an obvious passion for the subject, and he draws us into the saga of the English organ through his own manifest fascination with it. He calls on a handful of experts to add colour to his commentary: the historian Paul Binski provides a touch of sobriety, putting social context to organ developments, Nicholas Thistlethwaite’s elegant eloquence explains the evolving fashions which have shaped organ design since the 17th century, and Bruce Buchanan oozes old-school mischievousness as he recalls the heady days of the Henry Willis company, roundly dismissing the subsequent ‘stewards’ of the firm, deliciously noting, with reference to Henry Willis III, that ‘it was against his principles to agree with anyone’. The image of Buchanan standing alone in an empty St George’s Hall, Liverpool, staring admiringly at the organ as it thunders out WT Best’s transcription of The War March of the Priests is just one of many unforgettable visual images in this series of superbly edited films.

There is a pleasing coherence to the overall narrative, opening (to the accompaniment of pastoral birdsong) at what the film claims to be the oldest surviving English organ case, dating back to the mid-16th century and housed in the church at Old Radnor in Wales. The films go on to trace the development of the organ through various key figures in the world of English organ building. We hear of how the English organ remained virtually isolated from foreign influence until William Hill began to introduce German and Dutch elements, and Gray & Davidson brought in something more French. The much-maligned Hope-Jones is revealed as having had an enduring influence despite the fact that those whom he influenced ‘did not give him credit’. Harrison & Harrison are described as creating ‘the acme of the English organ’, while Ralph Downes and the Organ Reform movement (‘a cold shower after the warm bath of Romanticism’) are dismissed as having a misguided understanding of continental organ sounds, one expert suggesting that Downes’s knowledge of the sound of continental organs was distorted by having heard them through the tinny speaker of an old transistor radio. The documentaries end with the somewhat ambiguous message that the English organ has returned to its roots – cue a return to Old Radnor.

Moult is not just an enthusiastic guide, perhaps at his best exploring the organ stops at Holy Trinity, Walton Breck, but a highly versatile player. Every one of his performances here – ranging from William Byrd to David Matthews – is highly recommendable on its own terms. He is equally impressive as an accompanist, beautifully moulding his playing around the gorgeous sound of the Truro Cathedral choir in Stanford’s A major Magnificat. In short, in Moult, Fugue State Films has found an ideal advocate for the English organ and has supported this one man’s odyssey with a hugely impressive visual and audio package.