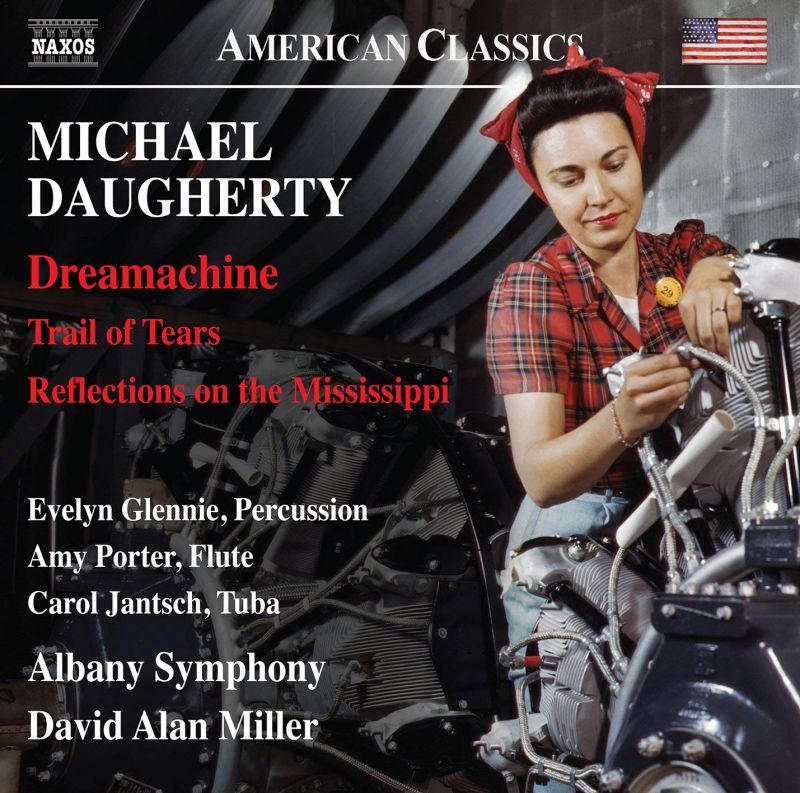 Michael Daugherty (b1954) has 20 concertos to his name and this highly enjoyable Naxos disc draws together three of his most recent. The centrepiece here is Evelyn Glennie’s scintillating performance of Dreamachine (2014), his third percussion concerto following UFO (1999) and – for timpani – Raise the Roof (2003). Dreamachine was inspired by fantastical machines in its first three movements (‘Da Vinci’s Wings’, ‘Rube Goldberg Variations’ – Goldberg being a cartoonist and inventor – and an illustration by Fritz Kahn of an electric eel-powered light bulb), although the finale, ‘Vulcan’s Forge’ relates to the iconic, logic-driven Mr Spock from Star Trek. Full of vividly scored music for soloist and orchestra, Dreamachine must be great fun to see live; on disc it seems, at 35 minutes, a touch overlong. (Compare it with Jennifer Higdon’s Pulitzer Prize-winning Percussion Concerto to hear the difference.) Nonetheless, Glennie plays it with her customary élan and there are worse ways to spend a half-hour-plus.

The flute concerto Trail of Tears (2010) – Daughtery’s third for the instrument – also has extramusical inspiration, ‘the forced removal of peoples from their homeland for political, economic, racial, religious, or cultural reasons’, specifically, the enforced trek of the Cherokee in winter 1838 – the ‘Trail of Tears’. The concerto ends, however, with a vibrant evocation of the Sun Dance, indicative of the tribe’s triumph over oppression. Amy Porter is in scintillating form in the solo role. So, too, is Carol Jantsch in Daugherty’s tuba concerto Reflections on the Mississippi (2013), a nature-poem in four movements, concise in length and highly evocative, as can be discerned from the section titles: ‘Mist’, ‘Fury’, ‘Prayer’ and ‘Steamboat’. The Albany Symphony accompany here, as throughout, superbly.

Reflections on the Mississippi