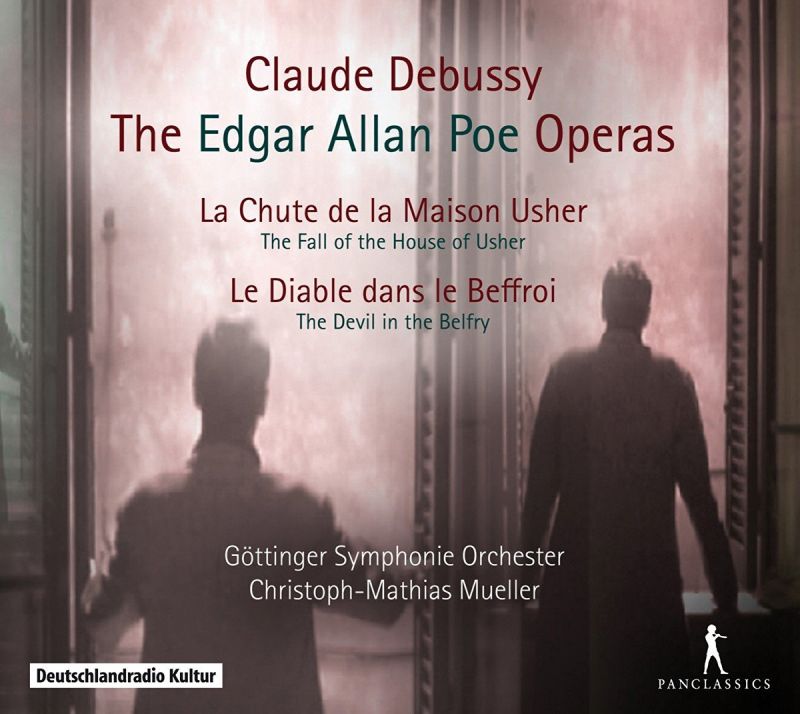 For the last 16 years of his life, Debussy worked intermittently on a pair of one-act operas based on the work of Edgar Allan Poe, eventually intended as a double-bill for the New York Met, where Pelléas had been enthusiastically received in 1908. He began Le diable dans le beffroi in 1902 but abandoned it in 1912, leaving only a scenario and a few pages of sketches. By then he was also struggling with La chute de la maison Usher, the libretto of which gave him endless trouble. This time, however, he progressed further with the music, leaving roughly half the opera in short score at his death.

There have been several reconstructions of Usher since. Versions by Carolyn Abbate and Juan Allende-Blin appeared in 1977; the latter, replacing the unset sections of text with dialogue, was recorded by EMI in 1984. The work only edged itself into the repertory, however, in 2006, when Robert Orledge’s completion was premiered in Bregenz. Orledge’s version of Le diable dans le beffroi, meanwhile, based on Debussy’s scenario and sketches but substantially his own composition, was given in Montreal in 2012 and the two operas were first performed together in Göttingen in 2013, where these recordings were made.

A satire on Puritan rigidity, Poe’s The Devil in the Belfry is set in the imaginary Dutch village of Vondervotteimittiss, where the inhabitants, obsessed by setting their watches and clocks to the chimes of the local church, are thrown into confusion when the Devil materialises in its belfry and makes midday strike 13. Debussy, however, was no satirist. The opera replaces Poe’s invective with whimsy, and the main narrative, dealing with the Devil’s impact on the affair between the Burgomaster’s daughter Jeannette and the Bellringer’s son Jean, was his own invention. His original plan was that the work should be chorus-driven. Orledge doesn’t quite follow this through, though he adheres to Debussy’s intentions that the Devil should be a violin virtuoso and that the score for this ‘gigue fantastique’ should be linked to that of Images. There are set-piece dances – polka, valse and tarantella. The Devil is seemingly German, enticing the villagers with snippets of Beethoven and Brahms. It’s a work of considerable charm.

With Usher, Debussy was on surer ground. Poe’s decrepit mansion and its introverted, neurasthenic inhabitants lurk, via Maeterlinck, behind Pelleás’s Allemonde, while the vocal writing marks out Roderick Usher, incestuously fixated on his sister Madeline, as a second Golaud. As with Diable, however, there are changes to the original tale: Poe’s shadowy Doctor is also now obsessed with Madeline and it is he, rather than Roderick, who pronounces her dead before entombing her alive in the family vault. Orledge’s completion is unquestionably superb. Where Allende-Blin carefully replicated the sound world of Pelléas, Orledge steers us into febrile territory closer to that of Jeux and Le martyre de Saint Sébastien. Your flesh crawls at the outset as oboe and trumpet meander under squeaky violin harmonics, and the tension never relaxes for a second during the work’s 50 minute span.

Performances and recording, however, have their occasional drawbacks. Usher is helped immeasurably by William Dazely’s blazing Roderick but elsewhere there are some variable doublings. Debussy gives Madeline little to do and Lin Lin Fan only comes into her own as Jeannette in Diable. Eugene Villanueva stands out both as Roderick’s rationalistic if bewildered Friend and as the unflappable village Burgomaster, though Virgil Hartinger, Usher’s creepy Doctor, is hopelessly overparted as Jean. You can’t fault Christoph-Matthias Mueller’s conducting and the Göttingen Orchestra’s playing is first-rate. Le diable dans le beffroi gets the better-balanced recording. La chute de la maison Usher seems hampered by the concert format, with Lin Fan placed too close at the start to suggest Madeline’s voice drifting through the house’s corridors and too far back at the close when her screams signal her horrific final emergence from the Usher tomb.