Diamonds in the Snow 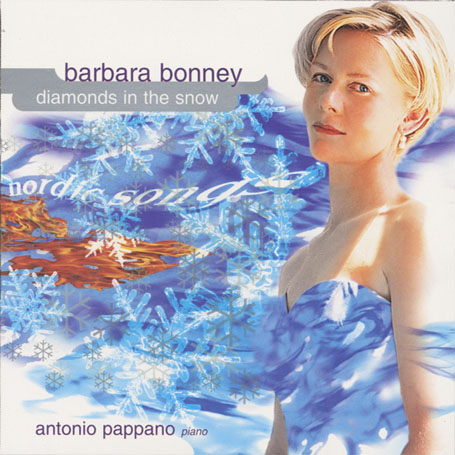 Scandinavian songs have long had a special place in Barbara Bonney's repertoire, and it is perhaps surprising that she has waited till now to devote a whole recital on disc to those for voice and piano. But then, singers tend to know their own voices best (at least, the intelligent ones do). This lovely soprano still sounds very like springtime, though in fact summer is getting on. The pure, silvery tones remain to her, while opening out into full bloom is the rose garden; a few years ago it would not have been apparent that these richer colours, with their intimations of depth and maturity, were biding their time, steadily developing their potential. And the songs need such resources - not each singly, but if a whole programme is planned, then, as a sequence they call for more than the voice of innocence and sunshine. That was the limitation of the Grieg recital by the admirable Bodil Arnesen on Naxos (5/97), just as that charming record supplemented the earlier Gramophone Award-winning disc on DG by Anne Sofie von Otter (6/93). Bonney, at this stage of her career, has both the maidenly silver for Solveig's Song, Die verschwiegene Nachtigall (Op 48) and the Stenhammar songs, and the fuller emotional and vocal reserves for Zur Rosenzeit and Ein Traum (also Op 48) and the Sibelius group.
Playing for her is Antonio Pappano, who once again (as in Rockwell Blake's Rossini recital, EMI, 10/96) shows that, unlike so many conductors who try their hands at it, he is a first-rate accompanist. In combination, these two artists have much to say - it is not necessary to go beyond the first song (Grieg's Varen) to recognise that. To those who feel they are already well stocked with this once-unfamiliar repertoire, I would urge that there is a great deal to discover and enjoy in these performances; for those who may think of starting, here is a golden opportunity.'

Diamonds in the Snow – Barbara Bonney

(The) Girl came home from her tryst

Melodies of the Heart