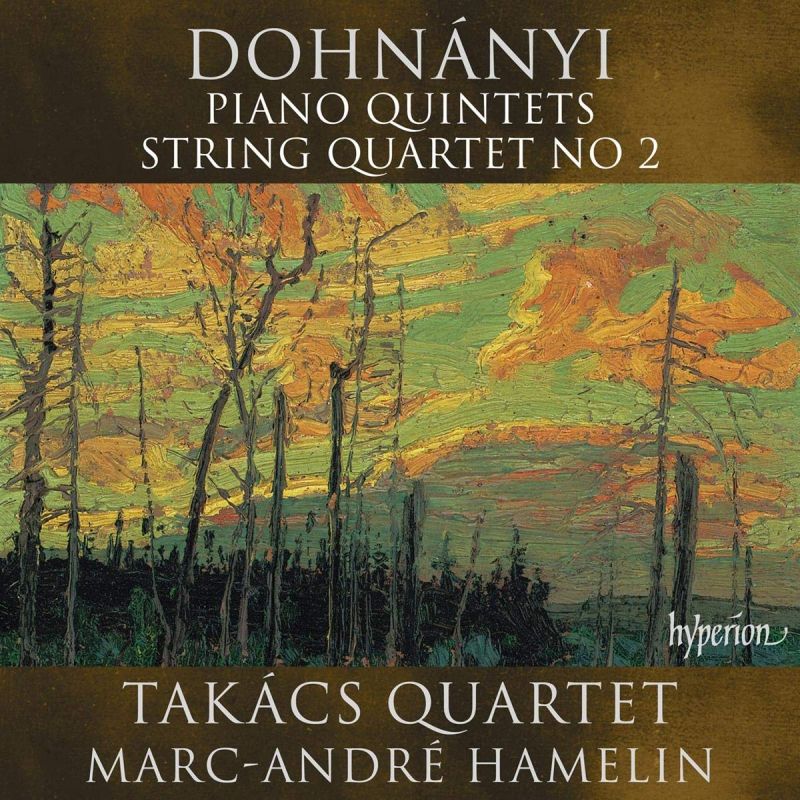 In another life Marc-André Hamelin might have made a great political agitator, or even an evangelist. He has an unbeatable ability to convey and inspire belief in the value of the music he is performing, especially when that music is in need of special advocacy. His Medtner certainly made me, initially a sceptic, give the composer another chance, and now with the considerable help of the Takács Quartet he is evidently looking for converts to the cause of Dohnányi’s piano quintets.

Even the most fiery preachers cannot make the First Quintet sound much more than it is: a solid academic work of a fine, talented 17-year-old student. Early critics put their finger on the influence of Schumann and Brahms here, and it is no surprise that the piece received Brahms’s seal of approval. There are already some fine accounts out there, including one from the Takács in an earlier incarnation – only the cellist remains in the ensemble today – alongside András Schiff on Decca. That version, however, suffers from poor microphone placing and murky sound. This new one is finely recorded, and I particularly enjoyed Hamelin and the Takács’s playful portrayal of the 5/4 finale, which could easily sound banal.

Hardly experimental but far more individual is the Second Quintet, composed almost two decades later. From the haunting opening bars to the otherworldly ending, with all Dohnányi’s typical cyclic traits along the way, this certainly makes a case for canonic status. Hamelin and the Takács bring a remarkable breadth of conception to bear, not just within each movement but across the entire work. They allow every passionate detail to come across yet preserve a sense of nobility and innate grace that I always associate with Dohnányi. By comparison the Schubert Ensemble on Hyperion are sleek enough but short of unstoppable energy. Gottlieb Wallisch and the Enso¯ Quartet on Naxos are a great budget choice, but again are no match for the overall urgency of Hamelin/Takács or, in particular, for the lilt they bring to the second movement. More comparable in quality are Roscoe and the Vanbrugh Quartet, who are also a fraction tighter in their tempos in all movements; but I do prefer the balance of the new recording and the magical warmth of Hamelin’s piano sound.

Interspersing the two quintets with Dohnányi’s Second String Quartet rather serves to reveal how much he depended on the piano to fire his imagination. For all the Takács’s sensitivity and full-blooded enthusiasm, it’s hard not to recall that Bartók’s First Quartet was just three years away and in a different league in terms of imaginative harmony, texture and structure. Still, this is an eminently collectable disc, certainly, but not only, for existing Donányi aficionados.

Quintet for Piano and Strings No. 1

Quintet for Piano and Strings No. 2