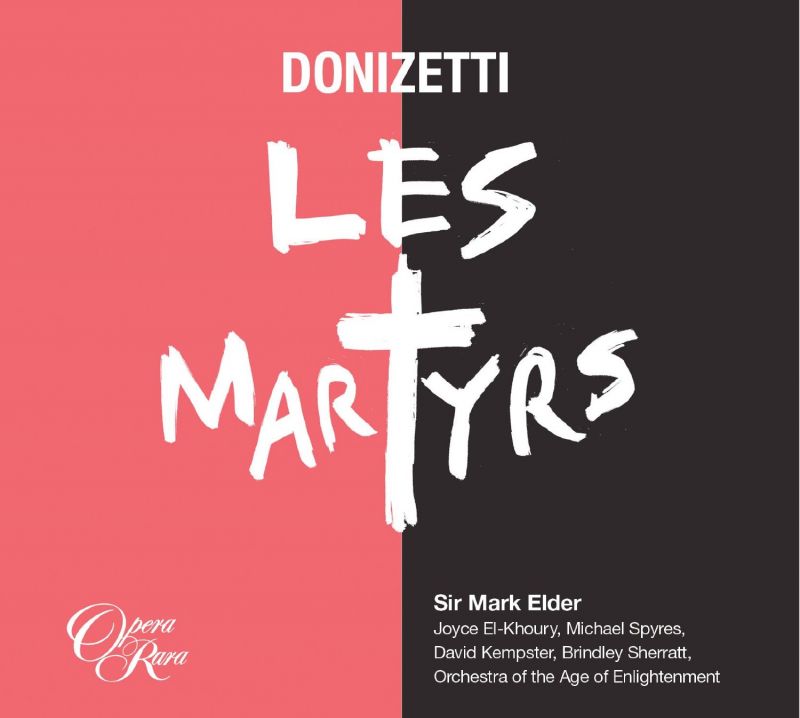 The knotty gestation of Les martyrs, explained in impressive and patient detail in Opera Rara’s characteristically excellent documentation for this release, has traditionally been seen having left the work as neither one thing nor the other: too Italian for Paris, too specifically Parisian in form to have had a lasting wider appeal. When Poliuto failed to get past the Neapolitan censors, Donizetti reworked it into Les Martyrs,expanding its three acts into four and recomposing all the recitatives – Eugène Scribe, no less, was on hand to adjust the text, returning to the same Corneille source used by Salvadore Cammarano’s Italian libretto. At its (much delayed) 1840 premiere, the Parisian critics complained it wasn’t French enough and it more or less sank without trace – living on briefly only in Italian translation. Poliuto, meanwhile, achieved a modest toehold of its own in the repertoire, not least in the 1960 La Scala production starring Callas, Corelli and Bastianini, variously available on disc.

Here Opera Rara has restored Les martyrs to its original splendour, Mark Elder conducting the new critical edition of the score in full, and with his love of the music shining through in ever bar. Indeed, the conducting and playing are arguably the recording’s greatest glory. The OAE’s sound is wonderfully sparkly and transparent, everything beautifully balanced – listen to the playing in the three dances of the Act 3 divertissement to sample the sheer quality on display. The wind soloists are wonderful, taking the spotlight in several aria introductions. Elder’s conducting is limpid and flexible, the rubato natural and seductive; I wondered only if he might have submitted more completely to the dramatic momentum as the Act 2 finale gathers a head of steam.

One can understand why Berlioz called the piece a ‘Credo in four acts’, though, and in its plot, the story of the Christian convert Polyeucte martyring himself in ancient Armenia, doesn’t provide much scope for character development. Polyeucte’s position is too fixed, while I pity any director trying to stage convincingly the almost comically swift eleventh-hour conversion of his beloved, Pauline – or, for that matter, their subsequent throwing to the lions. The most interesting character is probably Sévère, the proconsul in love with her but also determined to save him. But while the grand opéra set pieces are magnificent and the ensembles stirring, there are no arias to match, say, Léonor’s ‘O mon Fernand’ in the contemporaneous La favorite.

There’s no faulting the commitment of the singers here, however. As Polyeucte, Michael Spyres offers plenty of bel canto style and beautifully schooled phrasing – plus a remarkable interpolated top E. Joyce El Khoury’s tone can become a little occluded and is not flattered by the close ish balance but her performance as Pauline is hardly less remarkable, and tireless in bringing the character to life. Similarly, David Kempster can sound a little woolly of tone as Sévère but he sings with nobility and finesse. There’s fine support from the basses Brindley Sherratt and Clive Bayley, and the tenor Wynne Evans; the Opera Rara Chorus is on terrific form, too. Doubts remain about the work itself, then, but there’s little doubting Opera Rara’s achievement in letting us hear it sound so thrillingly fresh.