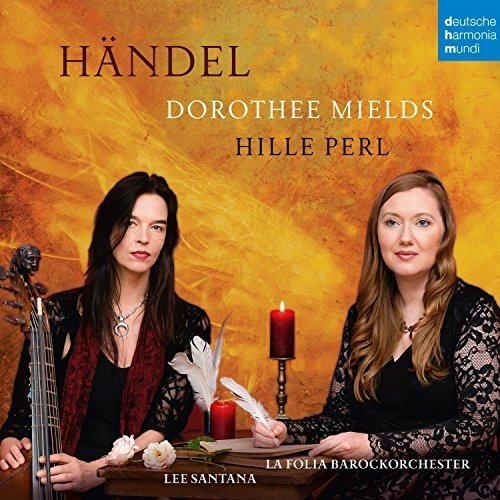 Handel for viola da gamba? Well yes, there is some, mainly from his early years in Italy, including obbligato parts in the oratorio La Resurrezione and the cantata Tra le fiamme. Then from the London years there are contributions to Giulio Cesare and an actual sonata, though in reality this is a violin piece which Handel wafted in the gamba’s direction by scribbling out the first few notes an octave lower at the bottom of the manuscript and adding the words ‘per la viola da gamba’; apparently it doesn’t lie too well under gambists’ fingers, but I guess it’s the thought that counts.

We get Tra le fiamme and the sonata here, along with a transcription of another cantata aria, its guitar accompaniment making it sound almost like some meandering pop ballad (recompense, perhaps, for Handel’s tendency to ignore the gamba’s lyrical side), but the disc is not just about Hille Perl’s viol, as the soprano Dorothee Mields occupies centre stage in two further cantatas, including the delicious Cantata spagnuola.

As ever when Perl is involved, warmth and affection abound, befitting not just the cantatas’ delicately amorous subjects but also the balmy air which Handel’s Italian-period music breathes so easily. But there is also spontaneity here, a tangible sense that the musicians are enjoying each other’s company and the slightly unusual combinations they find themselves in. Nowhere is that clearer than in the transcriptions (with added violin and imaginative harpsichord) of two sprawling keyboard chaconnes, in which they cut loose and egg each other on so freely that they may as well be improvising it themselves. Mields stands a little apart from this, perhaps, but her voice – clear, accurate and controlled rather in the Emma Kirkby manner – is a real pleasure to listen to; what a pity that it is somewhat submerged by the relatively large ensemble of Tra le fiamme! An unusual release, then, but full of infectious musicality.