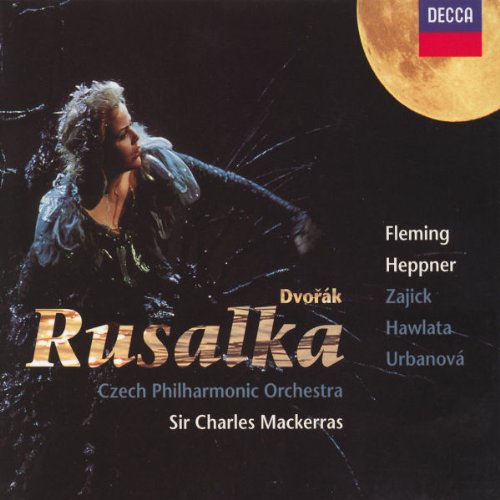 In Renee Fleming’s superb recital disc with Sir Georg Solti and the LSO (Decca, 10/97) the item which for me stood out even above all the others was her tender and heart-warming account of Rusalka’s Invocation to the Moon. It reflected the fact that the role of the lovelorn water-nymph, taken by Fleming in a highly successful production at the Met in New York, had become one of her favourites, the one she has now performed more often than any other in her repertory apart from the Countess in Figaro.
Ben Heppner also has a special relationship with the opera, for the role of the Prince was the first he ever studied in depth as a student. He has sung it repeatedly since then, often opposite Renee Fleming, and both he and Sir Charles Mackerras have long harboured the ambition to make a complete recording. The joy of this magnificent set is that in almost every way it fulfils every expectation and more, offering a recording with glowing sound that more than ever before reveals the richness and subtlety of Dvorak’s score.
Mackerras himself points out the Wagnerian influence. Though on the one hand the opulence of sound reflects that, more specifically the echoes of the Tristan love duet are what emerge even more revealingly. I think of the ravishing closing section of Rusalka’s big aria at the start of Act 3, when having been rejected by the Prince, she seeks consolation in returning to the water (third disc, track 1).
As interpreted by Fleming and Mackerras that long solo is as poignantly beautiful as the more celebrated Invocation to the Moon in Act 1, when she laments over loving a human. Comparing Fleming’s performance this time with the one on the disc with Solti, the first difference is that the sound of the Czech orchestra is even more tenderly seductive than that of the LSO, while Fleming heightens the emotional intensity of the second stanza with her characteristic flickering vibrato brought out a fraction more. The vulnerability of Rusalka is established all the more affectingly. In addition, the climactic moments bring glorious top-notes, firm and true up to B flat and B. On the 14-year-old Supraphon set Gabriela Benackova gives one of her finest performances on disc, but the emotions conveyed and the expression are broader, less subtly inflected.
When it comes to the others, the superiority of the new cast is very clear indeed. Ben Heppner, like Fleming, conveys his special affection for this music, unstrained up to top C, combining heroic power with lyric beauty in a way that the thinner-toned Wieslaw Ochman on Supraphon cannot match. Dolora Zajick as the Witch, Jezibaba, is even finer than Vera Soukupova on Supraphon, just as characterful and fruity but firmer and richer. Even more clearly, Franz Hawlata as the Watergnome, Rusalka’s father, outshines his opposite number, the wobbly Richard Novak. Hawlata’s singing is satisfyingly firm and dark, bringing a Wagnerian weight to the role, in places drawing parallels with Wotan or even Hans Sachs. The engineers also thrillingly capture the off-stage effects so important in this opera, with the Watergnome balefully calling from the waters of the lake.
Even the smaller roles have been cast from strength, all of them fresh, true and idiomatic. The clear-toned First Woodsprite, Livia Aghova, is a leading soloist in the Prague National Theatre, as is Eva Urbanova, the firmly focused mezzo who takes the role of the Foreign Princess. Similarly, Ivan Kusnjer (Gamekeeper and Hunter) is a noted Simon Boccanegra. What is striking is that there is not a hint of a Slavonic wobble from any of the singers, unlike a number on the Supraphon set. In the orchestra, too, the Czech horns are consistently rich and firm, with none of the whining vibrato of which there remained hints even in that 1984 Supraphon set. And if anyone is worried about having four non-Czech principals, they are as idiomatic as any rivals, with three of them – Fleming, Zajick and Hawlata – helped by having Czech forebears.
The final glory of the set lies in the warmly understanding conducting of Sir Charles Mackerras. It may seem surprising that such a specialist in Czech music is only now tackling his first complete Dvorak opera recording, but in every way this matches and even outshines his supreme achievement in the Decca series of Janacek operas. In those you had the Vienna Philharmonic, but here the Czech Philharmonic are both a degree more idiomatic and just as opulent in tone, with superb solo work. The strings produce ravishing sounds, refined and transparent in the lovely evocations of water, often with instruments muted. Mackerras is just as bitingly dramatic as Neumann in the Slavonic dance rhythms that punctuate the score, but he is also far warmer in the rest, whether in the love music or in the ceremonial and ballet music of Act 2.
He is helped there by a Decca recording far richer and more full-bodied than the Supraphon, giving a much keener sense of presence. The balance between voices and orchestra is well managed, with voices never drowned, though one oddity of the recording – which will not trouble everyone – is that characters tend to emerge on the scene with an initial phrase or two heard from off-stage. When the acoustic of the Rudolfinum in Prague, where the recording was made, is on the lively side, with plenty of bloom and ambience on the voices, there are times – notably with Heppner and Zajick – when the voices sound almost as though they remain half off-stage, surrounded by reverberation. Against that, this is a gloriously atmospheric recording that from first to last brings out the full magic of what the composer described as a “Lyrical Fairy-Tale”, the culminating masterpiece of his old age, still youthful in its richness of melodic invention.'