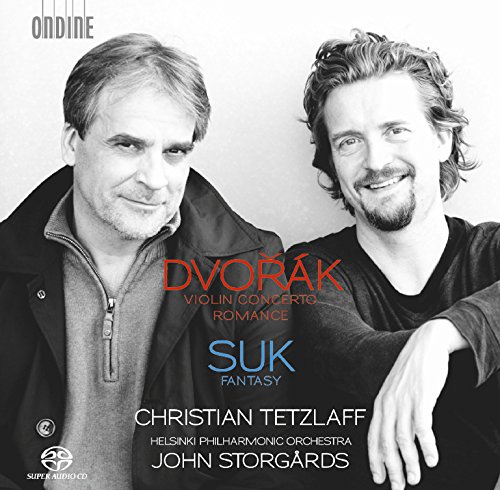 It was an inspired idea to open this disc with Josef Suk’s wonderful Fantasy, a sort of free-form violin concerto: such a striking initial tutti, fiercely dramatic, setting the mood for a searing 23-minute stretch, with some pastoral interludes to ease the intensity. John Storgårds inspires energetic playing from the Helsinki Philharmonic, accelerating subtly prior to Christian Tetzlaff’s first entry, though the strings don’t quite match Karel Ančerl’s cut-glass Czech Philharmonic (on Josef Suk’s first Supraphon recording) for precision, edge or bite. Once into the fray Tetzlaff draws on an exceptionally wide range of colours and nuances, from fragility to full-on passion, especially after the resumed tutti has allowed him more time to breathe. He’s very much his own man, personal and personable, plying a varied roster of dynamics and flexibly backed by the orchestra. You sense that every bar has been carefully thought through and yet there’s never as much as a suggestion of calculation.

Come the variations that set in from 5'28", the sweetness of his approach, and his willingness to follow the orchestra on dancing feet (6'55"), leaves a charming impression. From a purely violinistic point of view I’d choose Tetzlaff even above Suk: he brings so many rich ingredients to the piece and I’ve already enjoyed listening to his version many times.

In the case of the Violin Concerto and Romance by Suk’s father-in-law Dvořák, competition weighs rather more heavily. In the Concerto Isabelle Faust (with the Prague Philharmonia under Jiří Bělohlávek) is a prominent presence, her style following in the wake of Suk’s two recordings (Supraphon), some of her slides seemingly influenced by his. Tetzlaff on the other hand largely avoids portamento, though that’s not to suggest that his playing lacks either warmth or authentic flavouring. Quite the contrary; and, as with the Fantasy, there’s a winning suppleness about the playing, the sense that rather than being chained to the bar-lines he’s able to stretch across them, always the sign of a great artist. I also like the way he underlines the chordal writing at 7'23" into the first movement. The slow movement has tenderness to spare, the finale delicacy as well as panache.

And there’s the lovely Romance for violin and orchestra that in an earlier incarnation was part of a larger structure, Dvořák’s little-known String Quartet in F minor, Op 9 (B37). But nowadays it’s this meltingly beautiful movement that we hear most often, a piece that was premiered some time in the late 1870s and dedicated to ‘my dear friend’ František Ondříček, who subsequently did so much to promote the Violin Concerto. With Suk’s seductive earlier recording ringing in our ears even after many decades, any newcomer has to deliver with expressive generosity, which Tetzlaff does, his approach, as in the other works included here, individual but utterly persuasive. Excellent, full-bodied sound. A disc to prize.