The PHQ find the drama and the detail in Dvořák 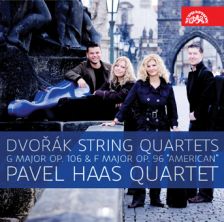 The first point to make about this highly enjoyable new coupling concerns the range of dynamics on offer, principally in the first movement of Op 106, at around 3'56", where a sudden dip to pianissimo intensifies the argument, especially noticeable in view of the surrounding drama. This is one of Dvorák’s most confident structures, a rustic musical argument that shies away from over-refined projection. The log-and-cinders glow of the slow movement is very much on a par with Dvorák’s late “American” masterpieces (which, strictly speaking, this isn’t – he wrote it on returning from his second American trip). The Pavel Haas Quartet play with plenty of feeling and they also relish the rhythmic cut and thrust of the Molto vivace third movement, capturing to perfection the more relaxed Trio’s sunny spirit. The finale opens to a gentle smile then keys up for some dancing exuberance, a high-point on this particular recording (cue 1'04" on track 4). As with the first movement, there’s an abundance of varied drama, the kind you hear in the finale of the Seventh Symphony.

In a sense I wish the Quartet had chosen another, less frequently recorded coupling. Much as I love the American Quartet, for me, say, Op 34 would have been far preferable. Then again, I suppose all good Czech quartets need to parade “their” American on disc, and this version is as good as most, a lyrical, high-spirited traversal, with few mannerisms and plenty of warmly traced detail. My only gripe concerns the finale’s second set (at around 0'50", tr 8) where tiny hesitations along the line don’t quite achieve the desired “lilting” effect. I can imagine them jarring on repetition. In other respects it’s a very good performance and a worthy companion for Op 106, which to say the least is more than good, a strong rival to the Emersons (DG, 10/90, 2/91) and the Panochas (Supraphon) in fact, though my all-time stereo favourite is a lean and sinewy performance by the Prague String Quartet (DG, 10/90R), a wonderful 1973 recording that’s currently only available as part of a highly recommendable complete set of the Dvorák Quartets. If you see it, bag it.