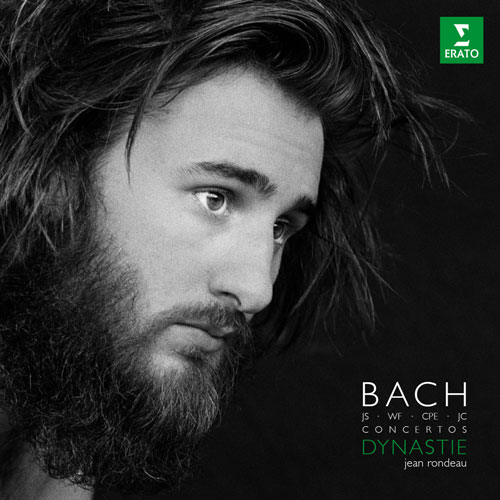 The young French harpsichordist Jean Rondeau made his debut on Erato in 2015 with ‘Imagine’, a recital of Bach keyboard sonata transcriptions (3/15). Now, having given us another solo keyboard disc last year of Royer and Rameau (4/16), ‘Dynastie’ (which is also being released on vinyl) sees him return to Bach for his first recording as a concerto soloist and director, complementing Johann Sebastian Bach’s keyboard concertos BWV1052 and 1056 with concertos by his sons Johann Christian, Wilhelm Friedemann and Carl Philipp Emanuel.

Rondeau has come in for some stick from certain corners of the critical world, facing accusations of bolshy rock’n’roll showmanship, and even of sounding jangly. Also, albeit more kindly put, of sometimes losing momentum through his free, unhurried approach. Listening to ‘Dynastie’, however, bolshy jangling showmanship is far from the impression I’m left with; and while Rondeau does indeed take a very relaxed approach to pulse and metre at points, the effect comes over more as charming and human, along with carrying a sense of absolute connection and improvisatory ease with his harpsichord akin to that of a jazz pianist (and incidentally jazz piano formed part of his training). Furthermore, moments of metronomic freedom are matched by equal amounts of firm exactitude where the music demands.

BWV1052 in D minor very much sets the tone of the whole: up-tempo but never feeling hurried, a gentle, fluidly flowing touch at the harpsichord, a central movement dramatised by hesitations and pauses, along with a legato approach that unfurls the harpsichord’s phrases as if as in one continuous, subtly ornate breath. Then, a strong-toned, crisply rhythmic third movement.

A highlight is Rondeau’s own orchestration of the ‘Lamento’ from WF Bach’s Sonata in G major. Sublimely written and glowingly performed, this track is a welcome opportunity for his accompanying string ensemble to move deservedly centre stage, Rondeau complementing them with prominent harpsichord background colour.

As for the rest, JS Bach’s BWV1056 in F minor has thoughtfulness, fun and flourish, followed by a reading of CPE Bach’s Wq23 Concerto in D minor which captures this stylistic wild child’s maverick choppiness with clipped, buoyant elegance. So, all in all, a recording to savour.

Concerto for Flute and Strings