EŠENVALDS Passion according to St Luke. The First Tears 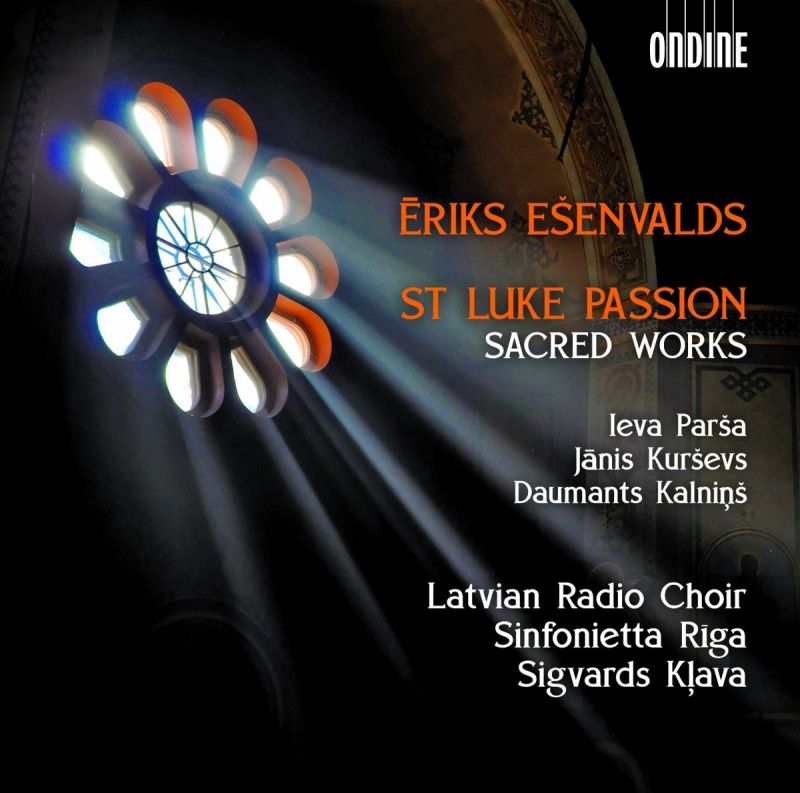 Ešenvalds’s St Luke Passion (2014) plunges the listener straight into the midst of the Crucifixion scene, rushing strings underlying the terrible urgency of the crowd’s shouts of ‘Crucify him!’. It’s an unusual and highly effective beginning, and I can say that it is unlike any other setting of the Passion with which I am familiar. Ešenvalds has a highly individual and striking melodic style, and there are wonderfully memorable moments for all three soloists (reflective passages include the second section and the fourth, a Middle Eastern-inflected setting of the Shema Yisrael for the smoky timbre of mezzo Ieva Parša) to offset the predominantly dramatic tone of the work. As well as the narrative from St Luke’s Gospel and the Shema Yisrael, Ešenvalds makes use of other texts, including prayers, and poetry by James Weldon Johnson and Christina Rossetti. Words by Rossetti are used for the final section, and I find this the least satisfactory; it seems to descend into a rather forced Romantic nostalgia, though the very final moments, fading away to silence, are very impressive.

A Drop in the Ocean (2006) is classic Ešenvalds, a combination of different prayers and languages, exploiting the paradoxical grounded-yet-etheral quality of the Latvian singers. It was originally written for the outstanding Kamer youth choir from Riga, and in spite of its predominantly meditative character, technical challenges are far from lacking. The First Tears (2014) is in effect a miniature cantata, based on an Inuit folk tale. It is shamanistic in tone, as befits the nature of the text, dealing with the moments after the creation of the world by the Raven; the composer not only makes wonderfully atmospheric use of the choir to create appropriate soundscapes but also employs a drum and other percussion instruments, a Jew’s harp and a solo recorder to huge colouristic effect. In Litany of the Heavens (2011) we hear for the first time the Latvian language: Ešenvalds makes use of a recording of an old man’s prayers heard from within a church, while the choir and ensemble provide what he calls a ‘prayerscape’. Colours are again idiosyncratic, to great effect – this time we have tuned glasses and overtone singing.

One could hardly ask for better performers in this repertoire than the Latvian Radio Choir under the inspired direction of Sigvards Kļava, and Ondine’s recording, made in St John’s Church in Riga, is a model of clarity. A superb release.

EŠENVALDS Passion according to St Luke. The First Tears

Passion according to St Luke

(A) drop in the ocean

Litany of the Heavens