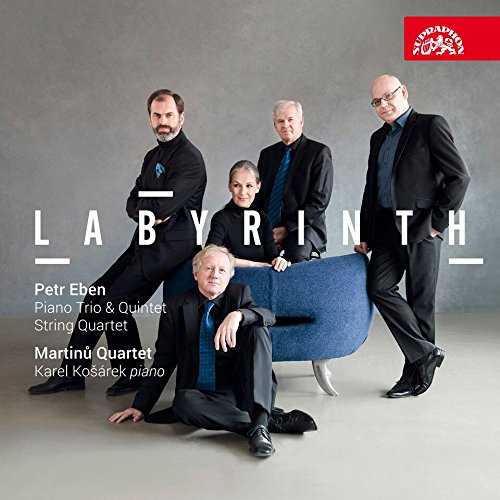 For all that Petr Eben – former president of the Prague Spring Festival – was perhaps the most highly respected composer in post-communist Czechoslovakia, his music has yet to achieve the international acclaim it deserves. Appointed organist of St Vitus Church in Český Krumlov at the age of 10, he specialised in composing music for his instrument, much of it inspired by his Catholicism. But he also embraced practically every genre besides, accruing some 200 works altogether by his death in 2007. This new Supraphon release, then, is particularly welcome, venturing beyond Eben’s more familiar organ music to showcase his equally affecting but relatively little-known chamber output.

The result is as memorable for its textural complexity as it is for its moments of haunting spareness; for its spiky modernism as it is for its forays into neoclassicism, Gregorian chant and the world of Slavic folk. In short, it’s a sound world that constantly eludes categorisation, nowhere more obviously than in its emotional colouring.

How, for example, to pin down the String Quartet? Subtitled The Labyrinth of the World and Paradise of the Heart, this 1981 work starts by evoking Bartók’s gnarliest music: its melodic angularity, knotted textures and rhythmic punch. But what follows is so pared down, so unstinting with its warm, consonant harmonies, that one almost struggles to believe it was composed by the same hand. The Piano Trio of 1986 goes further: this music can laugh and cry simultaneously, thanks to Eben’s ability to endow every textural layer with its own personality. But what is most remarkable is the economy with which Eben amplifies those personalities, a talent that pays dividends in his 1992 Piano Quintet. Not a note in this – the grittiest, most uncompromising piece on the disc – is wasted.

The Martinů Quartet give all three works the flexibility they demand, tracing their angular contours like a musical cardiogram. Meanwhile Karel Košárek does full justice to the capricious piano parts. There is real vigour and enthusiasm here, reminding us that this is not punishing contemporary music to be held at arm’s length, but simply music.

String Quartet, 'Labyrinth of the World'