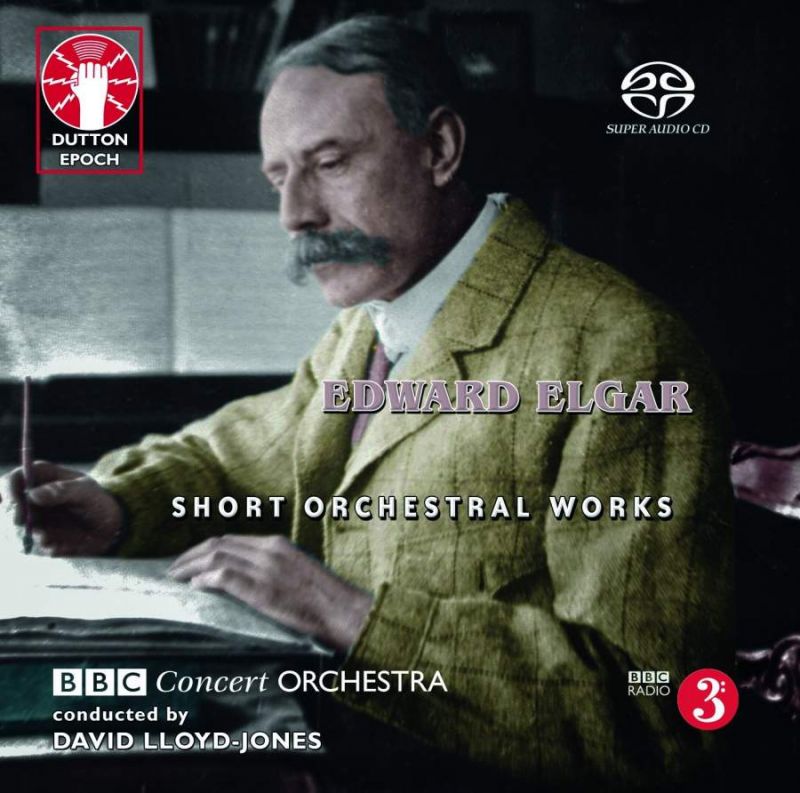 Two of the last century’s greatest symphonists, though disparately placed in so many respects, had one thing in common: both Sibelius and Elgar were accomplished miniaturists. This particular Elgar programme is interesting in that it includes two premiere recordings. The first, which opens the disc, is the composer’s earliest known orchestral work, Air de ballet, a jaunty little number imaginatively orchestrated, not least because of its unexpected employment of a euphonium. Elgar’s first published work for orchestra, Sevillaña, is gently prophetic of later pieces and like everything else on the programme benefits from the happy collaboration of the BBC Concert Orchestra under David Lloyd-Jones and Dutton’s superb recording. Concerning the Three Characteristic Pieces, Op 10, the brief introduction to the Gavotte is another recording premiere.

The first recording of Mina was made just over a week before Elgar’s death – he had heard a test pressing at his bedside, found the performance too fast and asked for it not to be issued. Lloyd-Jones’s reading is not only affectionate but considerably less hurried than its shellac predecessor. I’m sure Elgar would have loved it. Among other inclusions are Elgar’s own arrangement of the Canto popolare from In the South for small orchestra, the Three Bavarian Dances, Chanson de nuit and Chanson de matin, and other short pieces including Pleading, where the solo violinist, Charles Mutter, nails the style of the day with just the right balance of restraint and expressive eloquence.

Mutter also turns up on the first of the two ‘interludes’ from Falstaff, which, alas for those who are unable to locate an SACD player, are accessible only via the Super Audio facility on the CD. Not being an expert in these matters, I’m wondering whether a total disc timing of 81'25" meant that the Falstaff extracts could in fact have been included as part of the standard CD format. CDs with that sort of playing time are hardly rare these days (Daniel Harding’s Bavarian RSO Mahler Sixth runs to 82'28") but maybe Michael Dutton, being the technical whizz he is as well as a seasoned CD manufacturer, has had bad experiences of CDs with long playing times. Still, if you buy this disc (which I happily recommend) and keep glancing longingly at the final two tracks wondering whether they’re as good as the rest, I’m afraid I have to assure you – they are!