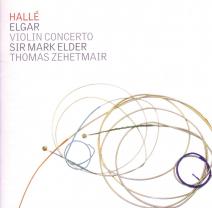 Aha: this is what I’ve been waiting for. Of late it has seemed as if every megastar violinist around has fallen for Elgar’s Concerto but to my mind this latest version blows the others – Ehnes and Znaider included – out of the water. Where Znaider’s performance was one of large-scale projection and an overtly sensual reaction to the score, Zehetmair’s reading is one of greater intimacy, while its intensity holds you in an iron grip from first note to last.

We’re also reminded how key the conductor’s contribution is, in this of all concertos. Remember the way Handley, in Kennedy’s first recording, never let his violinist overdo the swooning, moody beauty? Or Wood’s almost demented energy for Sammons? Zehetmair has in Sir Mark Elder a natural and hugely experienced Elgarian (how his Prelude from the unfairly maligned The Kingdom makes one long for a complete recording), the magnificent opening tutti full of detail without becoming overburdened by unwarranted slowings. And when Zehetmair makes his entry we’re immediately pulled into his sound world, rather than him projecting out: unlike Ehnes and Znaider he doesn’t sound unduly spotlit. From the first, there’s no cushioning of Elgar’s angst – which won’t necessarily be to all tastes but which to me seems to get closer to the heart of the piece than many. Zehetmair’s technical finesse is unassailable too, particularly in the outer movements – and the Hallé’s brass players are on particularly fine form.

In the slow movement Zehetmair and Elder are quietly moving, with the kind of unhistrionic approach that allows the music’s latent beauty to flower, very much in the way that Alice Coote does in her heartfelt reading of the non-choral version of the Angel’s Farewell from Gerontius. It’s a fittingly poignant ending to an exceptionally fine contribution to the modern-day Elgar discography.