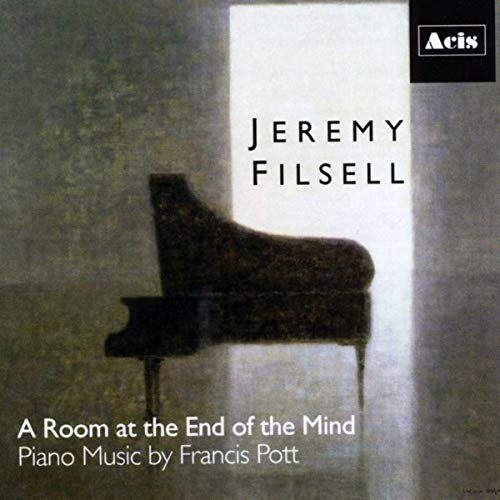 ‘One of those composers who seldom tests boundaries, preferring to turn back in search of roads less taken’, is how Francis Pott describes himself. In other words, conservative, or even ‘derrière-garde’. To which I reply: who cares? For Pott’s piano music communicates warmth, beauty, sophistication and heartfelt expression. It falls easily and memorably both on the ear and (presumably) in Jeremey Filsell’s expertly caressing fingers.

Take Venezia, for example. The ambling passagework gently grooves in cruise control, offset, however, by unexpected melodic twists or ornaments. The Scherzo-Notturno begins with seemingly innocuous pentatonic arpeggios that soon bump into harmonies one never saw coming. Towards the end, softer, more introspective sequences navigate darker, more brooding waters. Twelve delightfully diverse short character studies comprise A Room at the End of the Mind, the cycle from which this CD takes its title. Since space prevents detailed descriptions for each piece, I’ll draw attention to ‘The Church Mouse’ and its wry alternations between scampering high jinks and moments of not-so-comfortable respite. ‘Passamezzo’ might be described as Rachmaninov’s ‘Vocalise’ as rewritten centuries earlier by William Byrd. ‘The king went forth to Normandy’ puts that traditional Agincourt carol through energetic and virtuoso paces, barely leaving the pianist breathing room, yet never sounding the least cluttered or overwritten.

Pott’s 1983 The Song of Amergin is the collection’s one large-scale opus. Its first two and a half minutes are analogous to the opening of Debussy’s La mer translated into Middle English, with the music slowly yet decisively materialising from almost nothing. From that point on, the textures grow relentlessly energetic and chordal, even orchestral in nature, winding down to quiet in the last few minutes. Pott’s excellent ability to control harmonic tension and release over large stretches of time prevents the thick ambience from coming off heavy. On the other hand, such textures grow increasingly diffuse and, for the lack of a better word, ‘swimmy’ via Acis’s distant and overly reverberant engineering.

In short, the myriad attractions of Pott’s palpable musical gifts belie the modest and sometimes self-deprecating persona he depicts in his extensive booklet notes.

The Song of Amergin

A Room at the End of the Mind