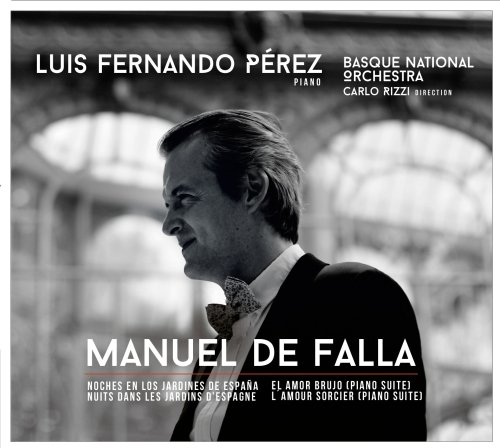 Having recorded the piano music of his fellow countrymen Soler and Granados (4/12), Luis Fernando Pérez now turns his attention to Spain’s most original composer of the last century, Manuel de Falla. Alongside the much-recorded Nights in the Gardens of Spain, Pérez gives us the less frequently played Fantasía Bética and suites from two of Falla’s popular theatre pieces. In the Fantasía, Pérez gets to the heart and soul of Falla’s Andalusia – or, more pertinently, its Roman past, ‘Baetica’ being the Roman name for Andalusia. A pianist tackling this work requires fingers of steel to penetrate the waves of notes, as well as the poetic inclination to let the middle section, an Intermezzo, run its introspective course. Pérez articulates the percussive sounds of the Fantasía’s flamenco rhythms with a pride and passion, while his Intermezzo sings as sweetly as the dolcemente marking suggests.

Falla produced his own piano versions of the three very familar excerpts from The Three-Cornered Hat. The Seguidilla flows effortlessly from Pérez, which is some feat given that the violin’s lovely tune, now in octaves, is set against tremolo, pizzicato and wind filigree, all seamlessly incorporated by two hands. In the dances for the miller and his wife, Pérez catches the earthy character of this couple’s fiery spirit, rooted in the soil on which they dance. He brings out the strong modal harmony in El Amor brujo, Falla’s ballet-pantomime that epitomises the gypsy character, culminating in the chimes of midnight that introduce the Ritual Fire Dance.

It was an inspired idea to team Pérez up with the Basque National Orchestra, founded in 1982, under the experienced Carlo Rizzi for Nights in the Gardens of Spain. The viola line at the beginning of this interpretation is truly misteriso and the impressionistic atmosphere and continuity between soloist and orchestra never tire throughout, offering a strong visual sense of time and place. The secret grottos of the palace garden, known as the Generalife, the sounds of a lively fiesta carried on a balmy breeze in the Distant Dance, then the gypsy musicians partying in the Sierra mountains of Cordoba are presented not just as a vehicle for virtuosity but with an awareness of the music’s unusual nature. The coda, one of the loveliest passages in Falla’s output, is finely drawn. A most successful disc.