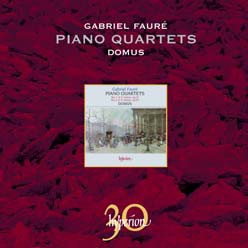 It's a long time since I've enjoyed a record so much on so many counts—performance, recording, sleeve presentation, and last but not least, the music itself. The group apparently came into being at the 1979 International Musicians Seminar at Prussia Cove, Cornwall; their name drives from the mobile dome in which they like to make closer contact with listeners than they deem possible in more conventional venues. In six years they have developed an exceptional intimacy of ensemble, here underpinned by an instinctive feeling for the music's style. In both quartets Faure emerges as unmistakably French. Yet how subtly they contrast the lyricism and mercurial fantasy of the first with the greater intensity of the second, dedicated to the German pianist and conductor, Hans von Bulow. I particularly liked their quick-silver-like fluidity of phrasing in the earlier work, also the pianist's very lightly-pedalled, frothing textures. And by startling the slow movement as a true piano, how much they have in reserve for its noble central climax. Their immediacy of response to atmosphere is no less acute in the Adagio non troppo of the G minor Quartet, ''whose beauty is truly Classical if we define classicism as intensity on a background of calm'' as Aaron Copland (according to the sleeve-note) once so aptly observed. For the more urgent flanking movements they find all the requisite tonal strength and rhythmic bite.
I admire the recording for its truthful tone quality and clear-cut textures, but still more for its dynamic range. Hyperion engineers are not afraid of a real pianissimo, and how much the whole sound spectrum is enriched in consequence. The sleeve-note writer has been allowed space for detailed comment. His perceptive note on the back of the sleeve is as right for the music as Laloue's Le Boulevard de la Madeleine on the front—and even that painting alone would make me look twice at the record on any shop shelf.'

Quartet for Piano and Strings No. 2

Quartet for Piano and Strings No. 1