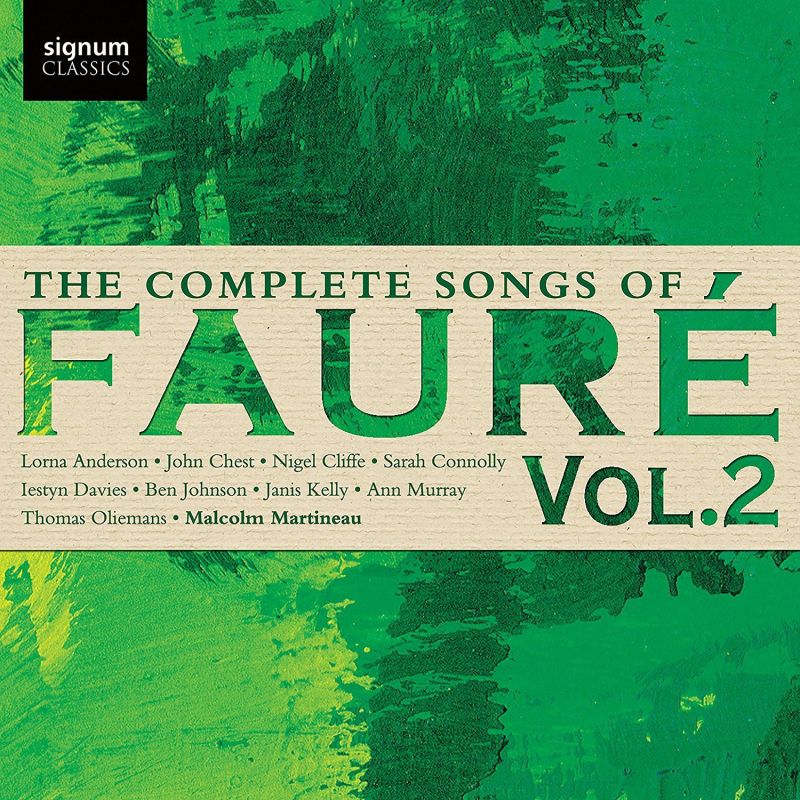 The second instalment of Malcolm Martineau’s survey of Fauré’s songs is exceptionally beautiful, both in choice of material and quality of performance. The format replicates that of its predecessor (A/16): three sets or cycles – La chanson d’Ève (1910), the songs from Shylock (1889) and the Op 85 group (1902) – are juxtaposed with songs that span Fauré’s entire career, shared between a carefully selected line-up of singers, nine in this instance. There are some lovely rarities here, notably the early Baudelaire setting ‘Hymne’ (1870), and a couple of duets, teetering on the virtuoso, that Fauré wrote in 1873 for Pauline Viardot’s daughter Marianne, briefly his fiancée, and her sister Claire.

Two singers new to the series are heard in the main works. Sarah Connolly’s performance of La chanson d’Ève is arguably the finest since Dawn Upshaw’s – ecstatic yet restrained, and superbly controlled, both dynamically and emotionally, as Eve’s awareness of the imperfections of Eden begins to register. Baritone Thomas Oliemans – dark-voiced, very elegant – tackles Shylock and Op 85. The Shylock Serenade blends swagger with sensuality: the ‘Madrigal’, addressed to Portia by the Prince of Aragon, is rightly more artfully poised and formal. His reined-in passion impresses in Op 85, where the Symbolist texts can seem dangerously overwrought.

The remaining singers are all familiar from the first disc. There’s accomplished duetting from Janis Kelly and Lorna Anderson: elsewhere, Kelly’s ability to sustain high, hovering lines is heard to advantage in the exquisite ‘Le pays des rêves’, while Anderson, with her warm middle registers, does wonders with the reflective ‘Le secret’. John Chest, whose singing was a real revelation in Vol 1, is similarly excellent here. Ben Johnson and Iestyn Davies only get one song each, though both are highlights. Martineau’s understanding of Fauré’s piano-writing, in which less means more and virtuosity is avoided in favour of nuance, remains impeccable.

Vocalises for voice and piano

Vocalises for voice and piano