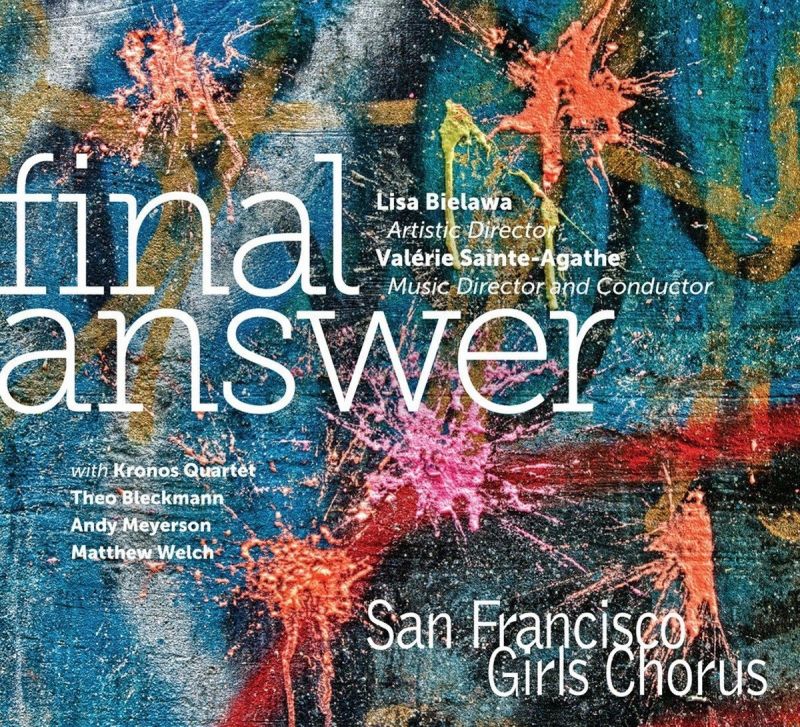 Most of the works on the newest release from the San Francisco Girls Chorus are receiving their first recordings, which brings up a pertinent question: will this music ever sound any more vital or affecting? The ensemble, led by artistic director Lisa Bielawa and conducted here by music director Valérie Sainte-Agathe, is a remarkable tapestry of teenage voices. They appear to be capable of handling any vocal challenge set before them. Beauty of tone, exceptional agility and keen attention to words mark everything the choristers touch.

On this new disc, Bielawa and Sainte-Agathe test the chorus in a rich array of styles as conjured by nine composers. The group are impressive in everything, but especially in the a cappella scores, including John Zorn’s lyrical, lilting Columbina, set to pointed and extended syllables, and Gabriel Kahane’s Back of the Choir, which chatters away to an Anne Carson poem while also embracing the verses’ poignant implications. Philip Glass’s Father Death Blues, touching Americana set to a poem by Allen Ginsberg, benefits from the chorus’s pure intensity, a quality used to different, equally vivid effect in Carla Kihlstedt’s radiant Herring Run.

The ensemble teams seamlessly with the Kronos Quaret in Bielawa’s haunting ‘Opening: Forest’ and Aleksandra Vrebelov’s Bubbles, which is as exuberant as its title (and contains important colouristic contributions from vibraphonist Andy Meyerson). Sahba Aminikia transforms the three Iranian lullabies in his Music of Spheres into enchanting narratives. The bagpipes that catapult Matthew Welch’s Salute on the Birth of Rory Mor are played by the composer in a work of bountiful and heartfelt creativity. And in the disc’s titular piece, Final Answer, the chorus applies its special magic to Theo Bleckmann’s probing paean to rationality and hope.

Salute on the Birth of Rory Mor

Vireo: The Spiritual Biography of a Witch's Accuser

Back of the Choir