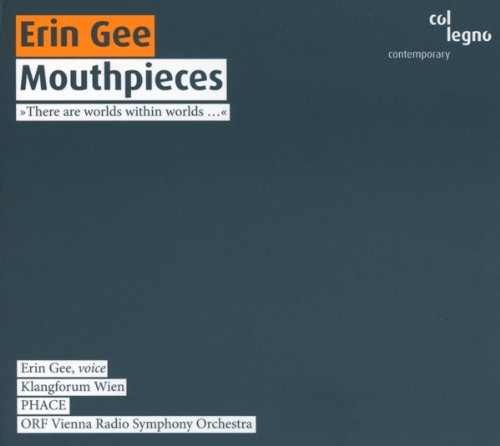 Music that uses the mouth as an instrument has evolved apace over the past century and Erin Gee clearly has a contribution to make – her ‘Mouthpiece’ series a little redolent of the ‘Vox’ sequence that Trevor Wishart created during the 1980s, while being a singular statement in its own right. Although not immediately evident from this non-chronological selection, a gradual expansion of means would seem to be the premise. Thus Mouthpiece I is a brief statement of intent, which Segment of the 3rd Letter translates on to a more expressive and even sensuous aural canvas. Mouthpiece VII brings the various structural possibilities of this sound process into a keener and more potent focus, while the two-part format of Mouthpiece IX facilitates a varied dialogue between the ‘soloist’ and an orchestra rich in subtle and beguiling sonorities. Mouthpiece X takes this to an even higher level, in what thereby becomes a freewheeling though no doubt meticulously organised interplay between these competing sound sources.

A concept such as this inevitably has to divest itself of any ‘novelty’ connotations – which it does in this instance through the tangible virtuosity of Gee’s formidable vocal execution, as well as the comparable (if relatively more orthodox) finesse of the instrumental component. It helps in the latter instance to have three of Austria’s leading ensembles on board, the overall programme benefiting from vivid sound along with extensive notes from Martin Brody. Short measure, but perhaps a ‘More Mouthpieces’ follow-up is in the offing?

Mouthpiece: Segment of the 3rd Letter