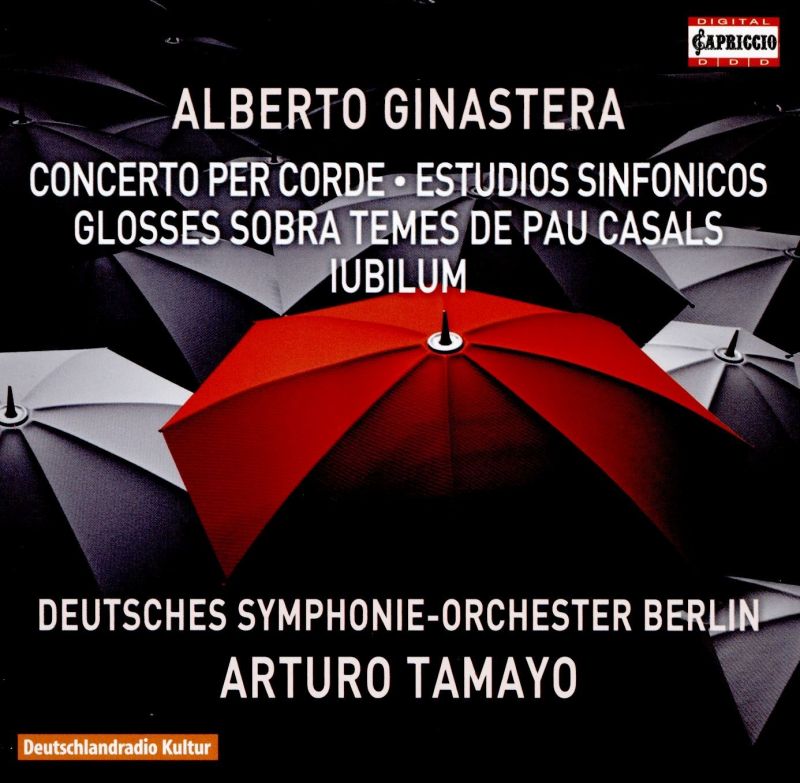 The Concerto for Strings (1965) and Glosses on Themes by Pablo Casals (heard here in its original string orchestra version of 1976) – masterpieces from Alberto Ginastera’s late, modernist period – are both well represented on disc. New to the catalogue are the Estudios sinfonicos (‘Symphonic Etudes’), arguably his most experimental work.

Composed for the Vancouver Symphony to celebrate the 100th anniversary of Canadian independence, the studies employ an arsenal of (then) avant-garde techniques, including microtonal writing and improvisatory passages. Truth be told, it’s only intermittently successful. At times it seems as if Ginastera had tried to cram as many novel sounds into the score as possible. Apparently, he himself was dissatisfied with the result and made several major revisions, including ditching an entire movement. It’s certainly worthwhile to have on record, however. The second movement, entitled ‘Para los movimientos alígeros’ (‘For Winged Movements’) is wonderfully evocative of whispery, fluttering motion, and Ginastera’s innate dramatic sense is manifest in something as subtle as a short harp glissando (at 2'01").

Iubilum (1980), another celebratory commission – this for the 400th anniversary of the founding of Buenos Aires – was previously recorded by the Louisville Orchestra. It, too, is an odd score: the jubilation suggested by the title is only evident in small sections that seem like addenda. Instead, the overall mood is gravely ceremonial, with a hint of tragic grandeur in the opening fanfare. The Louisville recording was good but this is both better played and better recorded. The Concerto and Glosses are also extremely well done. Arturo Tamayo elicits committed, colourful playing from the DSO Berlin and the engineering is first rate.

Glosses on Themes of Pablo Casals