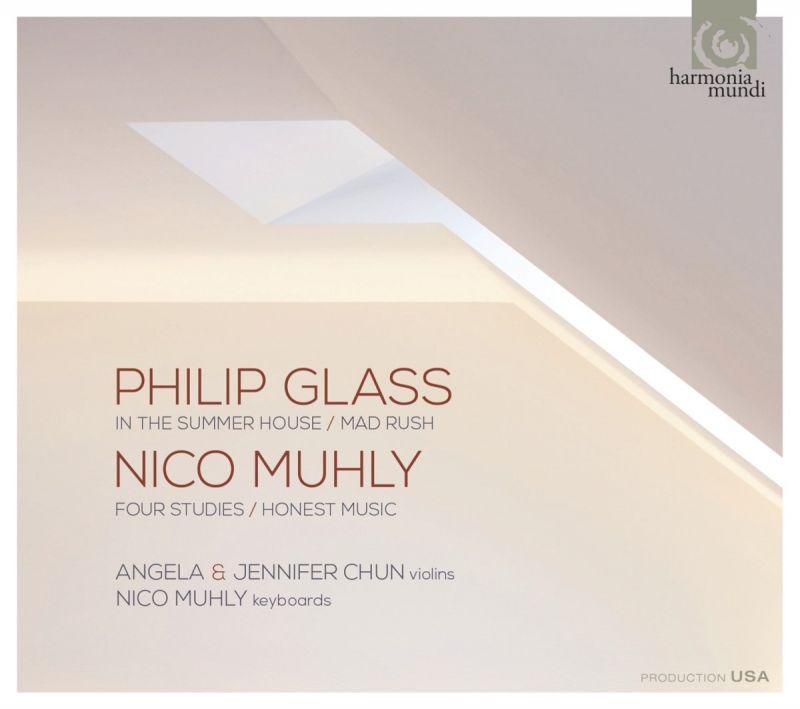 Philip Glass may have studied with two of the 20th century’s most revered teachers – Vincent Persichetti and Nadia Boulanger – but he never fancied the role of pedagogue for himself. Nevertheless, he has become something of a mentor for a number of younger composers, including Nico Muhly, who served a kind of compositional apprenticeship as Glass’s assistant for almost 10 years. It therefore seems appropriate that they should be paired together on this disc of music for two violins.

Muhly’s music is no cheap Glass imitation, however. For a start, the musical frame of reference is wider and more stylistically diverse. Also, unlike Glass, Muhly is fond of employing drones in his music, whereas in Glass they appear as psychoacoustic by-products of the combined individual lines. Four Studies sees Muhly exploring territory initially covered on ‘Drones’ (Bedroom Community, 2012); but whereas his approach on the previous album was largely exploratory and improvisatory, the material seems more fixed and deliberately ‘composed’ in Four Studies. The element of surprise may be lacking but Angela and Jennifer Chun’s violin lines are interwoven around shimmering drones generated by Muhly on piano and keyboard to create effective soundscapes. It takes courage and confidence to leave out so much. There’s a static quality about Honest Music (2002), too, although the musical colours are more monochrome here, the mood darker and more pervasive, and the brushstrokes broader.

Glass’s Mad Rush (1979) was originally performed by the composer on organ and has since been played on piano and even harp. The version heard here for two violins (prepared by Alexandra du Bois) is given a far less bombastic treatment than on any number of piano recordings. As in the less familiar incidental music supplied by Glass for a production of Jane Bowles’s play In the Summer House (1993), the Chun duo’s sensitive and delicate playing imparts at times ethereal and transcendental qualities to the music which, one suspects, in the case of Mad Rush, is more in keeping with the spirit of the Dalai Lama, for whom it was written.

In the Summer House