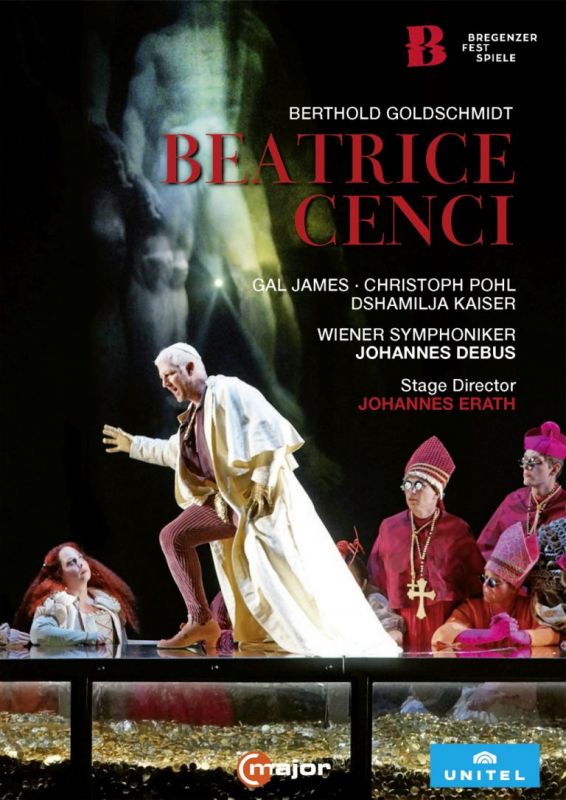 Completed in 1950, Beatrice Cenci was one of five operas commissioned to mark the Festival of Britain in 1951. Only one of them, however (George Lloyd’s John Scoman), was actually performed at the time, and Goldschmidt’s opera, arguably his masterpiece, had to wait until 1988 for its concert premiere at the Queen Elizabeth Hall. It was first staged in Magdeburg in 1994 and most subsequent revivals have taken place in Germany and Austria. This performance, the first on DVD, was recorded at last year’s Bregenz Festival.

Setting a libretto by Martin Esslin, it derives from Shelley’s 1819 tragedy The Cenci, dealing with the decline of a monstrous aristocratic Roman Renaissance family, though Goldschmidt and Esslin, exiles from Nazi Germany and Austria respectively, draw tacit parallels with recent history in their depiction of a society in which collusion between temporal and ecclesiastical authorities allows tyranny to run unchecked. Count Francesco Cenci, a pathological sadist, rapes his daughter Beatrice, murders his two eldest sons and terrorises his second wife Lucrezia. In desperation, Beatrice conspires with her stepmother and with Orsino, her former lover, now a shady priest, to have her father killed, only to find the full force of his allies in both church and state turning against her once his death is discovered.

The score is beautiful yet bitter. Goldschmidt’s vocal writing has a lyrical immediacy reminiscent of Puccini, though what flows beneath has much of the harmonic and orchestral astringency of Hindemith. The instrumentation is dark, gnarled and ironic. Oily woodwind expose Orsino’s duplicity, well before Beatrice sees through him: treacherous to the last, he worms his way out of responsibility for Francesco’s murder. Beatrice herself has two tremendous set pieces, the first an agonised scena in which she tells the bewildered Lucrezia about her rape, the second a haunting lullaby, sung to calm her stepmother while both are awaiting execution.

The Bregenz performance is unquestionably strong, despite eccentricities in Johannes Erath’s postmodern production. Sets and costumes elide the Renaissance with ’80s New Romantic. Christoph Pohl’s Francesco preens and struts on a perspex tabletop, beneath which his money is on open display, before donning a silver lamé jacket and singing into a microphone like a rock star. The historical Beatrice was executed near the Castel Sant’Angelo, so Erath glances at Tosca in an interpolated scene in which Per Bach Nissen’s Cardinal Camillo listens to the opening of Puccini’s Act 3 on a scratchy LP before heading off to Beatrice’s trial. Bringing Orsino back at the end to shoot himself over Beatrice’s corpse is a huge mistake.

Gal James gives a moving performance as Beatrice, her tone bright and wonderfully secure. Pohl is at once charismatic and horribly malign. Nissen makes a fine, hypocritical Camillo, unctuous and fearful in his initial dealings with Francesco, powerful yet dithering later on when faced with questions over Beatrice’s guilt or innocence. Dschamilja Kaiser’s Lucrezia, however, lacks focus in the centre of her voice, while Michael Laurenz’s Orsino can be effortful in his upper registers. The Vienna Symphony play beautifully for Johannes Debus, who propels the score forwards with considerable force, all the while mindful of its lyrical beauty and the myriad details of Goldschmidt’s striking orchestration.