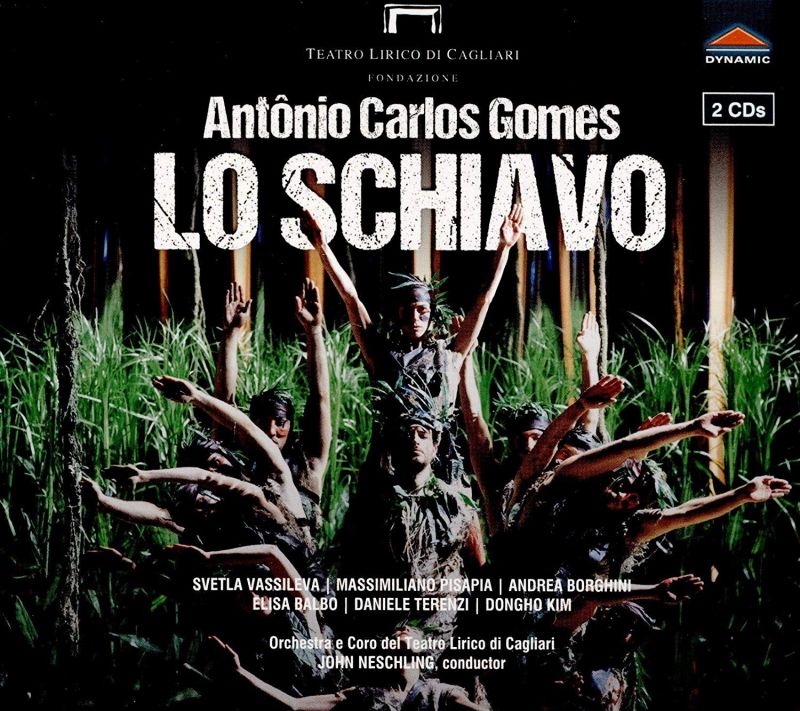 Born in Brazil, Antônio Carlos Gomes was a breakthrough composer – the first non-European to score an operatic success in Italy during its golden age. Straddling the period between late Verdi and early Puccini, Gomes studied in Milan and composed four operas which were premiered at La Scala. The most significant of these was Il Guarany (1870), which was recorded with Plácido Domingo in the title-role in 1994 (Sony, 5/96). Lo schiavo (‘The Slave’) was a later opera, set in Brazil with a plot focused on the slave trade. It was scheduled to premiere in Bologna in 1887 but was cancelled because of an argument between the composer and his librettist, Rodolfo Paravicini. Eventually, Lo schiavo had its debut at the Teatro Imperial of Rio de Janeiro in 1889 and would have been politically potent had slavery not been abolished in Brazil the year before. The opera’s impact was also weakened by the decision to move the setting back from 1801 to the 16th century, so the slaves were no longer black Africans.

Lo schiavo soon slipped into operatic oblivion, although the tenor’s Act 2 aria ‘Quando nascesti tu’ was recorded by the likes of Enrico Caruso, Giacomo Lauri-Volpi and Beniamino Gigli. In February 2019 the opera finally received its Italian premiere, given at the Teatro Lirico di Cagliari, from which the present recording (available both on DVD/Blu ray and CD) is taken.

The plot offers a classic tenor-soprano-baritone love triangle. Ilàra, a slave girl, is in love with Américo, the landowner’s son. His father disapproves and sets up a marriage between Ilàra and fellow slave Iberè. Throw in a rich countess who fancies Américo, but is a keen abolitionist, and things get complicated. Américo feels betrayed when he finds out about the wedding, the slaves flee and the natives prepare to rise up against Portuguese oppression. Américo is caught and brought to the natives’ camp to challenge Iberè, but the slave declares he has respected Ilàra like a sister and he sacrifices himself to engineer the couple’s escape (a little like the closing moments of The Pearl Fishers).

Gomes provides plenty of lyrical material for his singers. One can certainly detect the influence of Verdi, who declared him a ‘true musical genius’, even if his invention doesn’t rise above middle-period Verdi. The Prelude to the second scene of Act 4 is wonderful – a trumpet reveille from the Portuguese fleet mingling with birds at dawn. Some of the arias are very fine, particularly Iberè’s ‘Sogni d’amore’ in Act 4, a gift that should be taken up by baritones everywhere. Indeed, Andrea Borghini is the standout in a mixed cast. His sturdy baritone has a clean Verdian line and he sings his arias magnificently.

Svetla Vassileva is effective as Ilàra, less squally than I’ve heard her before, and she sings her Act 4 Romanza very nicely, with delicate control over pianissimos. Massimiliano Pisapia is not a success as Américo, his tenor sounding lightweight and hollow. He’s rather wooden as an actor too. But Elisa Balbo is a sparky, coloratura Countess di Boissy and Dongho Kim makes for a redoubtable Rodrigo, Américo’s father.

Davide Garattini Raimondi’s production is good by the standard of provincial Italian houses, although his direction of chorus and principals is rather static. Tiziano Santi’s sets give us plenty of jungle lianas, juxtaposed with the clipped topiary of the Countess’s residence in Act 2. With effective performances, this is a good showcase for Lo schiavo and I hope enterprising companies take it up soon.