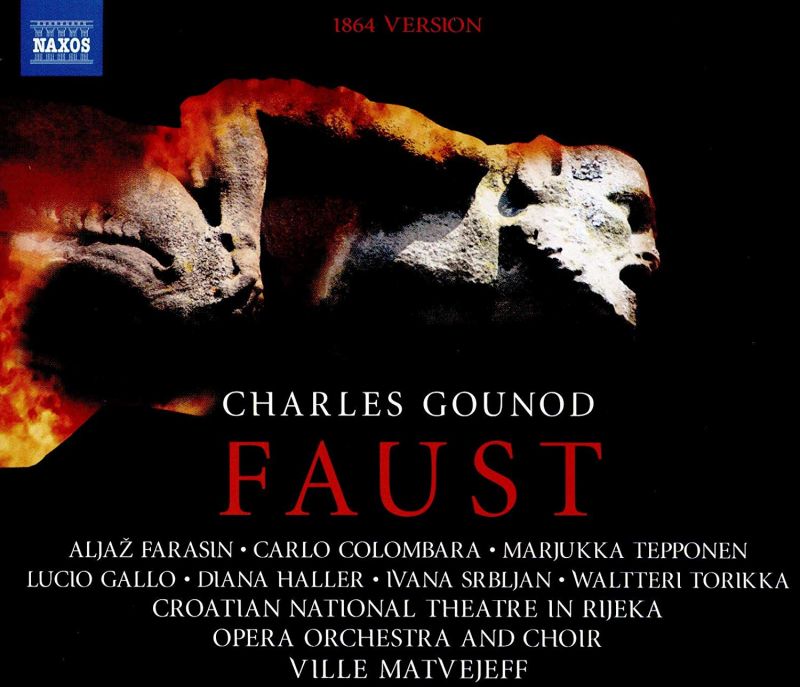 The popularity of Gounod’s Faust in the half-century or so since its unveiling was such that New York’s Metropolitan Opera was once nicknamed the Faustspielhaus. And recently, not least at Covent Garden, the work has in part re established itself as a vehicle for star performers. Naxos’s new recording, however, could hardly be called a star vehicle – although the veteran Italians Lucio Gallo and Carlo Colombara were relatively big names in their prime – and it’s a long way from the refinements of other well-known versions on disc.

Captured in a small-scale sound stage, the Orchestra of the Croatian National Opera in Rijeka is scraggly-sounding, some deft playing from the winds notwithstanding, and the chorus is on the raw, undernourished side. Ville Matvejeff conducts fluently and is especially effective in the more lyrical passages. But he fails to conjure up the necessary excitement or tension in certain key early scenes – the early duet between Faust and Méphistophélès feels especially tepid. Happily, he improves as the evening progresses, firing the drama convincingly in the final two acts.

And the cast? Colombara is a woolly, avuncular and rarely threatening devil but I find myself warming to him nonetheless – a strangely likeable Méphistophélès. Aljaž Farasin has the notes as Faust but none of the grace or seductiveness; his tone is opaque and gravelly where it should be liquid and honeyed, and there is little sense of rapport or sparring between him and Colombara. Gallo’s hectoring, ragged Valentin is best skated over, likewise Ivana Srbljan’s fruity Marthe, who arguably takes the prize – in a competitive field – for the least French-sounding French.

But there are a couple of lovely performances at the other end of the spectrum. Diana Haller is a charming Siébel, whose ‘Si le bonheur’ is a highlight. Marjukka Tepponen makes a youthful and moving Marguerite; and it’s largely thanks to her, and to Matvejeff finding his feet in the second half, that the performance proves dramatically rewarding – we’ve by no means got an outstanding night at the opera here but I found it slowly won me over on its own terms.

Finally a word about Naxos’s presentation. We are told this is the ‘London version, 1864’, which is a somewhat grand quasi-musicological name for what’s essentially the score’s final version (as on any other recording), but without the ballet that was added for the opera’s triumphant return to Paris in 1869.