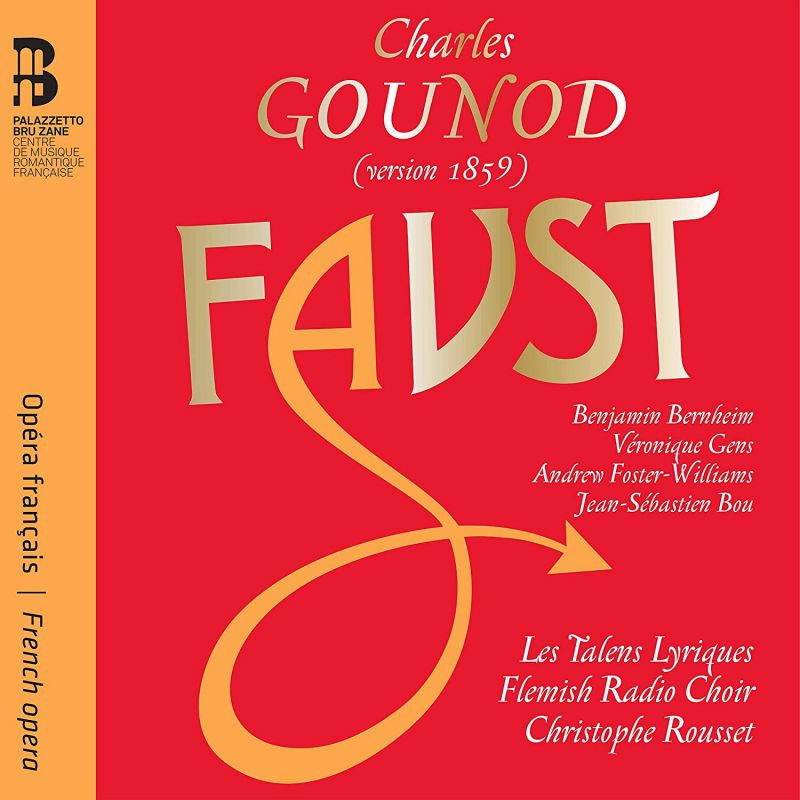 Hot on the heels of Naxos’s release of the ‘1864 version’ of Gounod’s hit opera (A/19), here comes a release of genuine historical and musicological interest. This ‘1859 Paris’ version features the score as we’ve never heard it before – before the recitatives (added in the early 1860s), before ‘Avant de quitter ces lieux’ (composed for London) and before a great deal else too. It’s little short of a revelation, in which some century and a half of performance tradition is scraped away to reveal a witty, fleet-footed work that comes close to the composer’s (and librettists’) original conception.

But things are rarely that straightforward – especially with 19th-century French opera – and, as the various essays that come in the hardback book that accompanies this release explain, this is no definitive ‘first version’, rather a viable version taking into account a huge amount of material originally composed for the work’s premiere at Paris’s Théâtre-Lyrique in 1859. It is something between an opéra-comique and the grand opéra it would later become when it transferred to Paris’s largest opera stage in 1869.

New (or, rather, subsequently dropped) numbers include a likeable trio for Faust, Siébel and Wagner in the first scene (those two latter roles are fleshed out a great deal in the dialogue); a duet for Valentin and Marguerite; Méphistophélès’s ‘Maître scarabée’ (eventually replaced by ‘Le veau d’or’); and an extra chorus for Walpurgisnacht. Siébel has a different little aria, ‘Versez vos chagrins dans mon âme!’, after Maguerite’s Spinning Aria, instead of the lovely ‘Si le bonheur’. There are other more fundamental changes: here Act 1 comprises what would later be the first two acts, while, in what’s now Act 3, there are two shorter outside scenes either side of the scene in the church – a configuration apparently enabled by some nifty production work on the Théâtre-Lyrique’s spacious stage.

All these changes – plus a certain amount of melodrama, some of it specially orchestrated for this release – make the recording a fascinating prospect for anyone interested in this period of operatic history. It also happens to be a terrific recording on its own terms. Benjamin Bernheim, freshly signed to DG, leads the cast as an ardent, fresh-voiced Faust, impeccably stylish, sensitive and with lovely voix-mixte at his disposal (displayed to winning effect on the seductive top C of ‘Salut! demeure chaste et pure’).

Véronique Gens, the booklets explains, is deliberately cast as a heavier-voiced Marguerite than usual, in keeping with how Gounod envisaged it, and she performs with the expected taste and intelligence, although the voice doesn’t seem to be captured at its most alluring. In contrast to the bulldozing basses that became standard in the grand opéra Faust, Andrew Foster-Williams is lighter – both in voice and characterisation – as a smart, cynical Méphistophélès. The other principals are also excellent, and all of them deal effectively with the dialogue.

Christophe Rousset underpins it all with conducting that is fleet and dramatically engaged. Les Talens Lyriques bring plenty of detail and life to their playing, and the Flemish Radio Choir sing with focus, their relatively small size presumably reflecting the size of the original forces rather than what we’ve subsequently become used to. Only the set’s engineering gives me cause to grumble, with the voices often set too far forwards in an occasionally over-reverberant acoustic – the recording was made in two different venues. But with Palazetto Bru Zane’s presentation a model of scholarship and generosity, this is release is otherwise a cause for celebration.