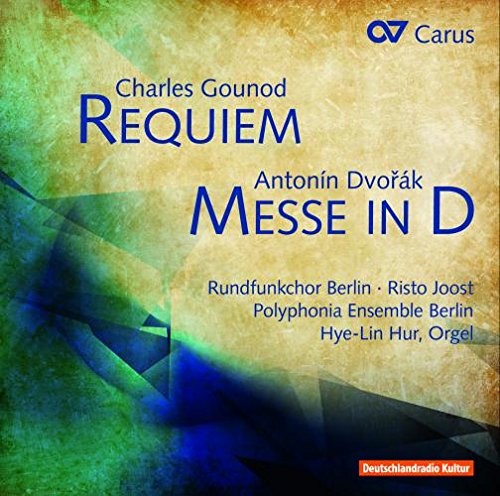 The Berlin Radio Choir join together with members of the excellent Polyphonia Ensemble in Risto Joost’s moving but not extrovert performance of Dvořák’s continually inspired and melodic Mass, which is spacious and full of dedicated feeling. Although written to be sung with organ alone, Dvořák later orchestrated the score in 1894, first for wind ensemble, later effectively reduced to a wind quintet, attractive in itself and supporting the voices very effectively. With first-class soloists (especially the radiant soprano Anne Bretschneider), after the relatively lyrical Kyrie and Credo, Joost builds considerable power at the climax of the Sanctus, while the Benedictus ends joyously, before the contrasting Agnus Dei, where the choir and soloists together, create a poignant climax at the close.

Gounod’s Requiem, which made its debut on Good Friday 1894, is again full of melody, and opens with the organ, before the choir enters somberly but affectingly, with a lovely hushed Introit and Kyrie. An elaborate sequence of soloists is then joined by the choir, singing music which continually changes in character. It moves affectingly through the ‘Dies irae’, the mellower ‘Rex tremendae’, the ‘Ingemisco’ and the ‘Confutatis maledictus’ until it reaches the dramatic moment of Judgement. The Sanctus bursts in briefly but exultantly; the Benedictus ends with the cry of ‘Hosanna in excelsis’ and is followed by the touching Pie Jesu, in which all four soloists participate tellingly but in which Anne Bretschneider’s contribution stands out. The Agnus Dei and Communio, which Verdi praised, end the work seraphically, and complete a performance in which all four soloists and the choir are touchingly responsive to Gounod’s setting. The recording is made in an almost perfect acoustic.