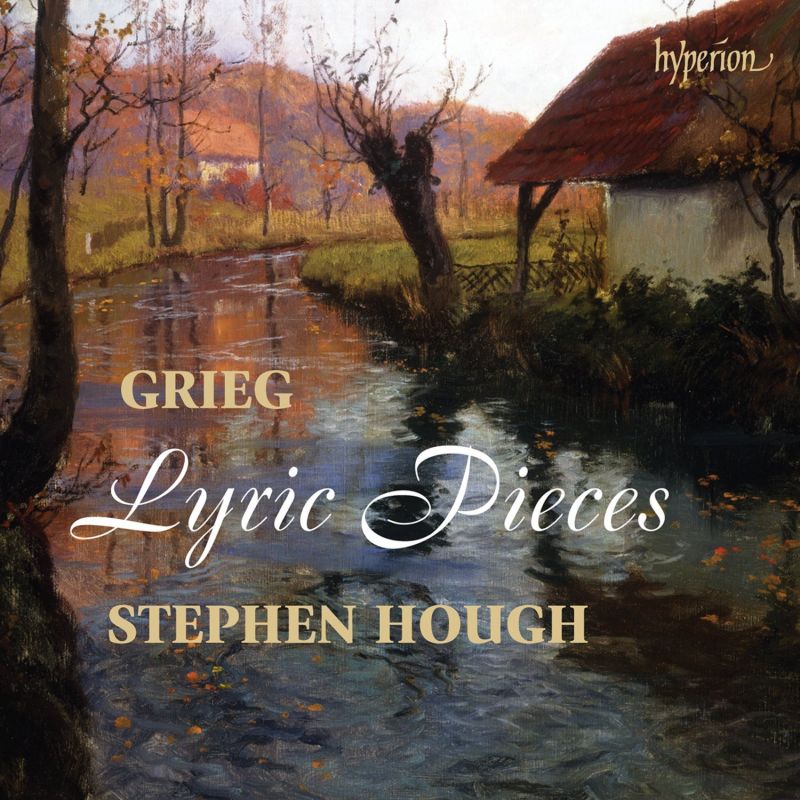 Grieg may not be in the pantheon with the greatest but his freshness of invention continues to give his music a classic quality. He was a born lyricist and his piano pieces and songs established him as a master, not just a miniaturist, unfailingly strong, original and sensitive in their harmonic language. They are equally strong in refinement of rhythm as well. Schumann rather than Mendelssohn was godfather to the 10 volumes of Lyric Pieces, which carry on Schumann’s tradition of the ‘characteristic’ piece whose title so often conceals an intimate experience.

Stephen Hough’s selection of 27 is chronological, beginning with the ‘Arietta’ from Book 1 (1867) and ending with Grieg’s recollection of it in ‘Remembrances’ (‘Efterklang’) in Book 10 (1901). The pieces form a poetic piano diary running through his life. There are banalities, here and there, but the boldness and tenderness of the melodic ideas are paramount. You can play the CD through as a recital, compiled as it is with taste and enough concern for variety. Better though to make shorter sequences of the tracks and be drawn in more intently to Hough’s artistry and the cunning with which Grieg took so many choice features of Liszt’s and Wagner’s harmony, compressing them into small spaces and making them his own. He hated his student years in Leipzig and made sure his music after that would stay fresh and northern, and bang up to date.

The CD sits nicely alongside such classic selections as Emil Gilels’s of 1974 (DG, 3/75, 2/97) and Leif Ove Andsnes’s of 24 numbers played on Grieg’s own 1892 Steinway (EMI, 4/02). There is also Walter Gieseking from way back (EMI, 4/99): high-class sight-reading, one might say, but far from negligible. If an intégrale of all 66 is your goal (it would never be mine) there is Gerhard Oppitz (RCA, 4/94) and the respected Eva Knardahl (BIS, 11/87, 8/88). A tribute here is also surely due to Peter Katin, who died recently and did much for the Lyric Pieces in this country before anyone bothered with them greatly. The wonders of YouTube had me hooked on sampling the composer’s own piano rolls as well as some delectable examples of Sviatoslav Richter.

Stephen Hough is up there with the best; may we never take his excellence for granted. In weight of expression he is often lighter than the great Russians, Gilels making all 20 that he plays so personal whereas Hough’s detachment – it’s a small thing – is also telling in its way, the detail and overview consistently in balance. His virtuosity, polish, control of nuance and a huge range of dynamics are lovely to have. The piano is a Yamaha, for a change, a high-end product which sometimes shouted a bit, I thought, in fortissimo, and it’s a fine recording made just a year ago at St George’s, Brandon Hill.