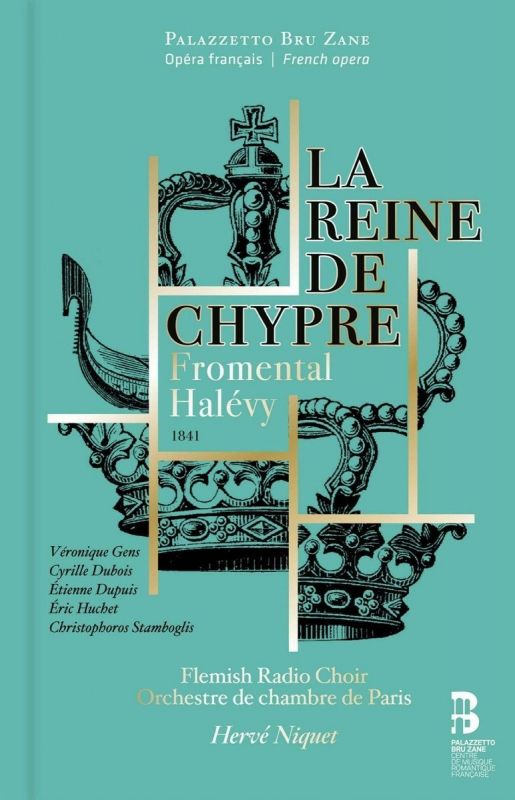 Fromental Halévy (1799-1862): not a name one comes across very often. But he was a key figure, with Meyerbeer, in the development of Parisian grand opéra: pupil of Cherubini, posthumous father-in-law (so to speak) of Bizet, he composed more than 30 operas, of which the most successful was La Juive (1835). Nearly seven years later, on December 22, 1841, came La reine de Chypre. Donizetti’s Caterina Cornaro (1844) covers the same ground and was in fact based on the same libretto. The Caterina of history belonged to a powerful Venetian family with interests in Cyprus. She was married to the French king of Cyprus – who promptly died, almost certainly poisoned by the Venetians; after reigning as a puppet for 15 years she was forced to abdicate, and Cyprus became part of the Venetian empire.

Venice itself is the villain of the opera, embodied in the sinister figure of Mocénigo: he prevents Catarina from marrying Gérard, a French knight, by telling her uncle, Andréa, that the feared Council of Ten requires her to marry the French king, Jacques de Lusignan. The action moves to Cyprus, where – neither man revealing his identity – Lusignan saves Gérard from Mocénigo’s assassins. When, at the wedding celebrations, Gérard tries to kill his rival, Lusignan spares his life. Two years later, Gérard turns up from Rhodes as one of the Knights of St John. Mocénigo is arrested and the dying Lusignan rallies before joining Gérard’s men in defeating the invading Venetians. The widowed Catarina shows the new king, her infant son, to the people, while Gérard and his fellow knights sail away.

The Palazzetto Bru Zane has done Halévy’s reputation an enormous service by presenting this splendidly cast recording in a new edition painstakingly assembled by Volker Tosta. Some passages are probably being heard for the first time; other passages are omitted, including the ballets and, oddly, the chorus of gondoliers described in an accompanying article as ‘so popular in its day’. Given that another recording is unlikely to appear for a long time, it’s a pity that Bru Zane didn’t go the whole hog and add a third CD so that the whole score could be given, variants and all. And what a score! It has almost everything you could wish for: heartfelt airs, passionate duets, powerful ensembles, subtle orchestration. Halévy makes telling use of reminiscence motifs, such as the phrase beginning with four repeated notes to represent Mocénigo and his plotting. ‘Almost everything’, because the man is a bare-faced thug, not a two-faced schemer like Shuisky in Boris Godunov for whom the tenor voice seems entirely appropriate. Éric Huchet does well but it would have been more effective if Halévy had made Mocénigo a sepulchral bass.

Catarina was written for Rosina Stoltz, the mistress of the director of the Opéra. Hers is the first voice we hear, quickly followed by Gérard’s. Their duet establishes their love, so soon to be frustrated, the first act ending with Andréa’s forbidding the marriage. It’s not till the beginning of Act 2, after a creepy entr’acte featuring pizzicato lower strings, solo woodwind and a church bell, that the focus is on Catarina alone. Véronique Gens, in superb voice, is dramatically convincing throughout, as though she were in a staged performance.

Cyrille Dubois is equally magnificent as Gérard, a part written for Gilbert Duprez. His great Scene and Air comes in Act 4, where he prepares to murder Lusignan. Michael Spyres included the latter section in his ‘Espoir’ recital (Opera Rara, 10/17); here we have the whole thing, top B flat, C and D flat ringing out brilliantly and fearlessly at the end. ‘Salut à cette noble France’, Gérard’s stirring number with Lusignan, goes with a swing, Halévy here tipping his hat to the duet ‘Amour sacré de la patrie’ in Auber’s La muette de Portici. Étienne Dupuis, sensitive in the ensuing ‘Triste exilé sur la terre étrangère’, is touching in his dying farewells. Chorus, orchestra and Hervé Niquet’s conducting are exemplary. An absolutely thrilling recording. Now which enterprising company is going to stage this masterpiece?