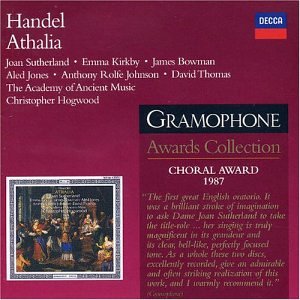 ''The first great English oratorio'': that was Winton Dean's view of Athalia in his classic study of Handel's oratorios 30 years ago. We have had several chances since then to hear the work, as well as its predecessors, and the judgement stands up well. Athalia, composed for Oxford in 1733 to a libretto that draws on Racine's play, tells the story of the usurping, apostate Jewish queen, Athalia, and her overthrow when the prophet Joad and his wife Josabeth bring the true heir, the boy Joas, to the throne. The action is pretty feebly handled by Handel's librettist, Samuel Humphreys (in particular it is never made clear what actually happens to Athalia in the end, or why); but several of the characters are quite strong and Handel grasps the opportunities offered him for striking music.
Athalia herself fares best of all, musically, as one would expect; and it was a brilliant stroke of imagination to ask Dame Joan Sutherland to take this role in the present recording. She is of course a great Handelian, but is scarcely a figure one expects to see in early-music circles. In the event, the slight disparity of approach between her and the other members of the cast serves ideally to symbolize the separation of Athalia from her fellow-ISraelites, putting her, as it were, on a different plane. Dame Joan uses more vibrato than the others in the cast, but the singing is truly magnificent in its grandeur and its clear, bell-like, perfectly focused tone. The sound is rather large against the baroque flute (very sweetly and gracefully played) and upper strings in (Softest sounds'', her first aria, but better that than an unnatural, contrived balance. Just before this comes Athalia's entry, an extraordinary sequence with her tortured recitatives interrupted by the Baalites' choruses (designed to cheer her up: the music is in Handel's best carefree-heathen vein); Dame Joan is superb in the relating of her dream where her mother Jezebel appears to her. Athalia's part is not in fact a large one, with only two full-length arias; the second, ''My vengeance awakes me'', is an energetic piece which she throws off with enormous spirit (even if the ornamentation goes beyond the well-judged stylistic limits observed elsewhere in the set).
Among the rest, Emma Kirkby is in her very best form, sining coolly, with poised musicianship, and with quite astonishing technical command at times. Listen to ''Through the land'', in Act 2, where the voice is beautifully balanced with two recorders and violins, the passage-work perfectly placed, the oddly shaped phrases pitched with absolute sureness, the thrilling a delight. Her Act 1 aria ''Faithful cares'' is finely done too in spite of a hint of clumsiness in the accompaniment once or twice James Bowman, as Joad, has his moments, and always sounds well, but I have heard him sing with more warmth and imagination. David Thomas is dependable in the often very vigorous music for the priest, Abner; and as Athalia's priest, Mathan, Anthony Rolfe Johnson sings in shapely fashion. The boy Joas is sung, as it should be, by a boy, in this case Aled Jones, who gives a very controlled, very exact performance, perhaps rather careful but of intense tonal beauty.
I found the choral singing a little variable. At its best, for example in the chorus that opens the Second Act, it is first rate, spirited, forthright, accurate (and the recorded sound in this particular number seems to me outstanding in its perspective, brightness and clarity). Also first rate is the fine chorus ''Rejoice, O Judah'' that ends Act 2. But in certain of the others there is an air of the routine, and the result is wanting in character and expressive force. There is much good, crisp orchestral playing, though some of the Academy of Ancient Music's less positive characteristics are to be noticed too: an occasional moment of unsure ensemble, and a lack of broad shaping—The final Allegro of the Overture, spiritedly done but with no sense of cumulative force, exemplifies this. These are however small, perfectionist quibbles: as a whole these two discs, excellently recorded, give an admirable and often striking realization of a work with many choice things, and I warmly recommend it.'