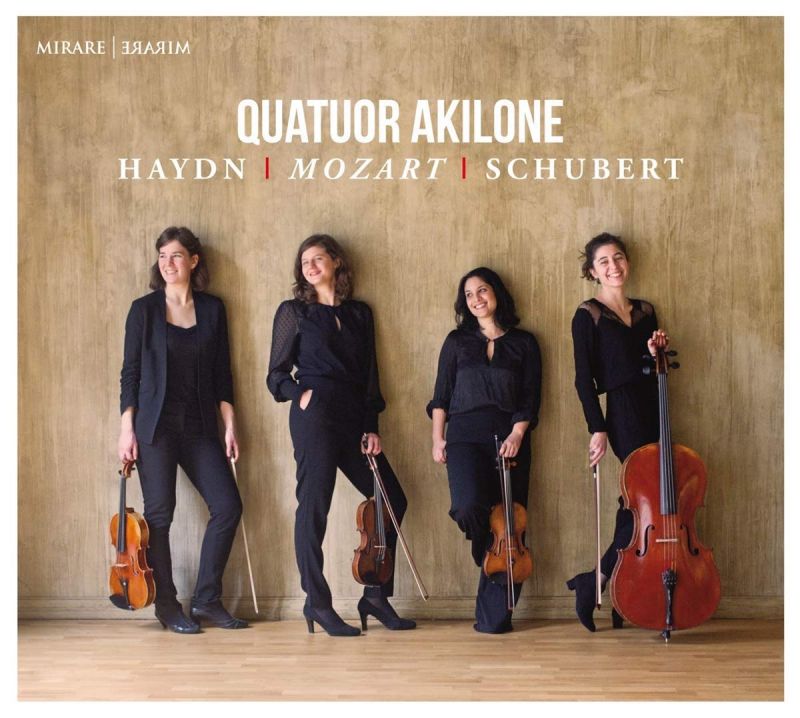 In the engagingly written booklet notes accompanying this debut release from the young French Quatuor Akilone they talk in some detail about rhetoric: that while Haydn, Mozart and Schubert have used rhetoric very much as a tool at the service of sound rather than as their primary goal, it’s still audible in these three quartets. So with Haydn’s Quartet in C, Op 20 No 2, that means rhetoric in its pure state, in the form of lively and interesting conversation; while in the following Mozart Quartet in G, K387, it turns up as staged operatic conversation; then with Schubert’s Quartettsatz the rhetoric is dreamlike and magical in delivery, submersed in tales, poetry and art.

I’m taking the trouble to relay the quartet’s written thoughts because I’ve been so struck by how very audible this gradual transformation is across their three interpretations, to the extent that, having already listened extensively before reading the booklet, I didn’t need to be told that this was a rhetorical journey in time. Likewise the idea of polarity that they’ve adopted following discussions with their mentor, Alban Berg Quartet founder Hatto Beyerle; listen in the Schubert to the dynamic extremes happening on the flip of a coin, or the juxtaposition of music and silence in the Haydn second movement.

In fact, particularly with the Haydn, some readers who prefer a little bloom may find their playing a touch dry. However, it is immensely classy: elegant, precise and dainty, sounding very much like a lively and intelligent conversation. I’ve also been enjoying the sharp, slightly unblended edge to all this precision in some of the punchier moments of octave homophony; and note that this impression of different personalities coming together is very deliberate, as is clear when you compare it to the blending of, say, the two violins moving together alone in sixths in bar 19 of the slow movement, or their poetic duetting in the later cantabile section, where Elise De Bendelac’s second violin sensitively holds back from Emeline Concé’s first. (An interesting comparative reference point, if you are trying to work out what you think of all the above, is the Chiaroscuro Quartet’s reading – BIS, A/16).

There is a very slight filling-out of the textures for the Mozart, and again for the Schubert; the latter is an interpretation that keeps fragility and vulnerability to the fore, even where the tension might perhaps be allowed to slacken a bit.