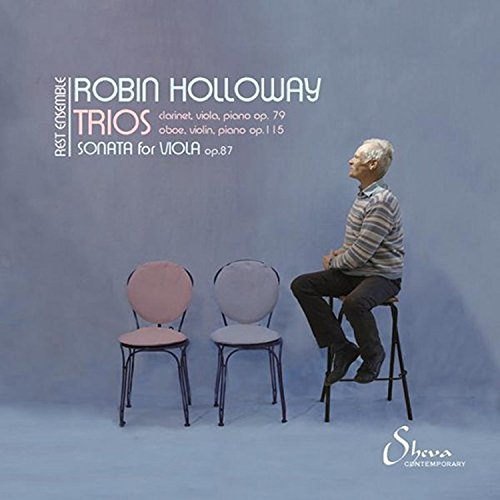 Robin Holloway once stated that as a young composer he wanted to be ‘a Modern among the Moderns’. Now in his seventies, the modernist has become ‘a Romanticist among neo-Romantics’.

Spanning a period of 50 years, the final leg of this long and chequered journey of musical self-discovery can be traced in the three works included on this disc. The Trio for clarinet, viola and piano, Op 79, which dates from the mid-1990s, is set out in the form of an animated three-way conversation. Each instrument sets out its position but soon enough the dialogue erupts into a full-blown argument, and all-out conflict is only assuaged by a lyrical solo passage on piano.

Another, more cerebral conversation is also going on here, this time between Holloway and echoes of musical pasts. Modernist elements now appear as nothing more than disembodied traces, distilled in the form of hollowed-out 19th-century operatic gestures or fin de siècle Viennese-style dances.

While the Op 79 Trio is in a single, continuous movement sliced into short episodic slivers, the later Trio for oboe, violin and piano, Op 115, makes greater use of expansive lines and gestures. Dialogue between the three instruments is more direct and integrated – the music formed from paragraphs rather than pithy postulations.

Both the Op 115 Trio and Sonata for solo viola, Op 87, adopt a formal structure where the final movement’s bipartite design telescopically conflates the mood and tempo of the previous two movements. This works especially well in the sonata, where the preceding trios’ animated chatter has given way to an internal musical dialogue at peace with itself. The performance by members of the Rest Ensemble is accurate and assured throughout, with viola player Henrietta Hill acquitting herself especially well in the sonata.

Trio for oboe, violin and piano

Trio for clarinet, viola and piano