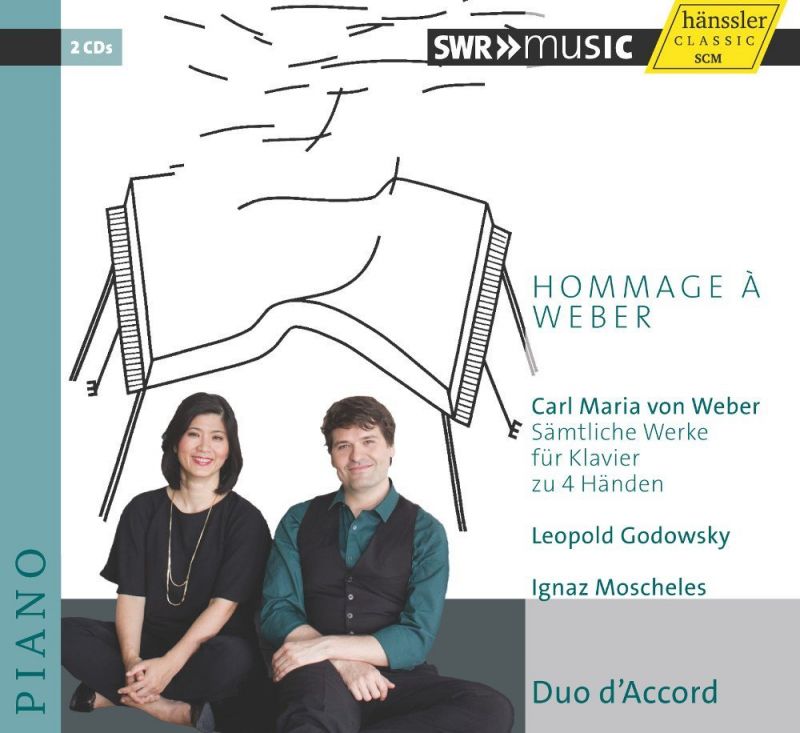 First, the recording. Duo d’Accord – Lucia Huang and Sebastian Euler – lives up to its name in terms of precision ensemble and musical accord, though throughout this programme the primo part (Euler?) is more forcefully projected than the muted and occasionally somewhat generalised secondo. There is nothing occasional, however, about the sharp nasal intake of breath on every up beat – not good for repeated listening and a distraction from the realistic and well-focused sound recording.

Weber’s piano works, sadly, seem to have fallen out of fashion. At his best, he demands to be heard as part of the staple repertoire, though (and as this release illustrates) not all his keyboard music is of equal interest – which is when Weber relinquishes his seat at the high table. Things get off to a sparkling start with the overtures to Abu Hassan and Silvana arranged for piano duet by Richard Kleinmichel (1846-1901). The Duo’s own two-piano version of the overture to Der Freischütz opens disc 2. All sparkling stuff, as is the ingenious duet arrangement by Friedrich Jähns (1809 88, cataloguer of Weber’s works) of the Piano Concerto No 2, a tour de force from Huang and Euler. Of far less significance are the four sets of brief duets (Opp 3, 4, 10 and 60), 22 titles in all, that punctuate proceedings. Domestic use only. Cherry-picking needed.

Moscheles’s Grand Duo using themes from Euryanthe and Oberon, on the other hand, is a fascinating curiosity in three movements. The homage is completed by Godowsky’s labyrinthine treatment of Invitation to the Dance, a densely woven contrapuntal exercise in thematic combination that is amusing on one level but on another robs the original of its essential joie de vivre.