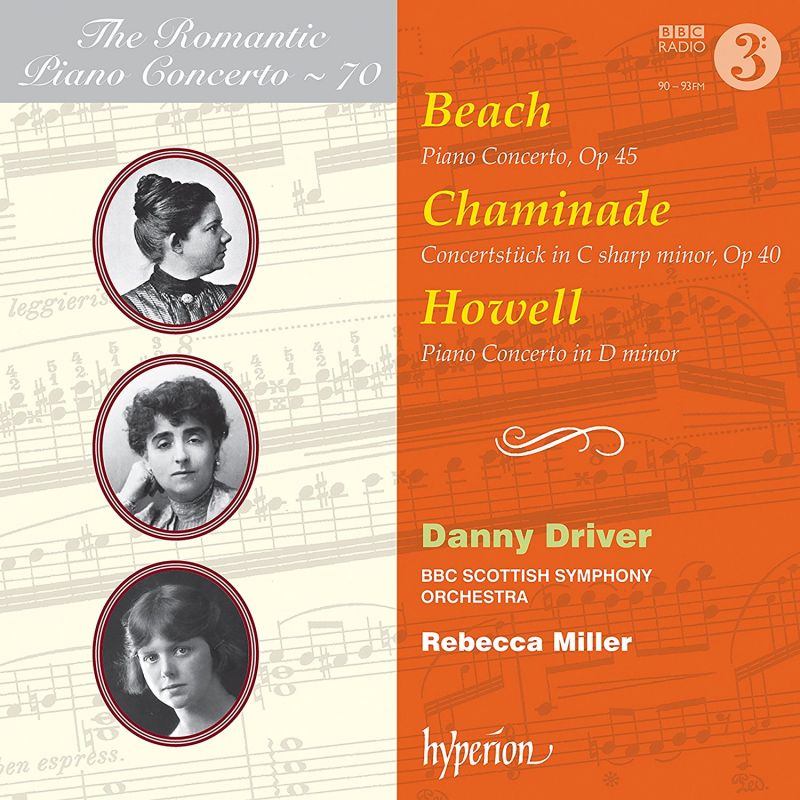 None of the 91 composers featured on the previous 69 volumes in Hyperion’s Romantic Piano Concerto series has been a woman. As if to redress the balance, Vol 70 has three. It is sponsored by Ambache (a charitable trust dedicated to raising the profile of music by women), and the BBC Scottish SO (leader Laura Samuel) is conducted by Rebecca Miller, whose special rapport with the soloist may or may not have something to do with the fact that she is married to him.

It is little to do with Danny Driver’s gender that allows him to far outshine two earlier champions of the Amy Beach Concerto who happen to be women: Marie Louise Boehm (sounding a little elderly now on Vox or as part of the 40 CD Brilliant Classics box set I welcomed in the August 2016 issue) and Joanne Polk (Arabesque, 6/00). This is a big, virtuoso vehicle demanding great endurance and a bravura technique (the first movement lasting nearly 17 minutes is followed by a very difficult vivace perpetuum mobile 5'38" in length). Driver surmounts these demands with real artistry and, in the lovely slow movement, immense sensitivity. Hyperion’s recording (Simon Eadon and Andrew Keener in Glasgow’s City Halls) is also better focused and with greater depth than the otherwise fine version from by Alan Feinberg (Naxos, 6/03).

If Driver offers a robust, muscular view of the Beach, he is certainly in touch with his feminine side in the highly attractive single-movement Concerto (19'33") by Dorothy Howell (1898-1982), composed in 1923. Lighter in substance but even more appealing is Cécile Chaminade’s Concertstück in the same key as the Beach. The repeated scale figure could become mundane. In Driver’s hands it is enchanting – as indeed is this whole disc, a worthy addition to this series, launched more than a quarter of a century ago.

Concertstück for Piano and Orchestra