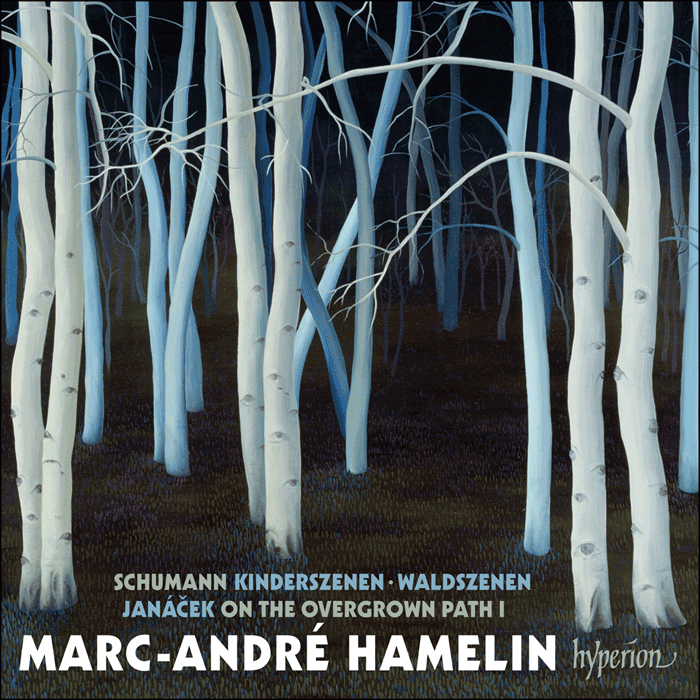 Marc-André Hamelin’s normally genial features cloud at the description of him as a ‘super virtuoso’. For him such apparent praise implies limitation rather than virtue. But here, in his latest disc of music by Janáček and Schumann, he shows himself a virtuoso in a deeper sense, a virtuoso in sound, colour and poetic empathy, one who, to quote Liszt, ‘breathes the breath of life’. Using his prodigious command in music of a transcendental difficulty – the Chopin-Godowsky Etudes, the major works of Alkan, Albéniz’s Iberia, etc – he displays gifts which show him as first and foremost a musician’s musician. In music of an elusive rather than flamboyant challenge he is a master of simplicity, of music which, in Goethe’s words, proves that it is when working within limits that man creates his greatest work. The fewer the notes, the more subtle and exposed the task. Certainly you could never align Hamelin with, say, Horowitz’s teasing, lavishly tinted sophistication or Cziffra’s hysterical bravura. He is a virtuoso in another sense.

Linking Janáček and Schumann is both a natural and an enterprising choice. The seeds of Schumann’s final collapse are already present in Waldszenen’s ‘Verrufene Stelle’ (‘Place of evil fame’, where flowers are nourished by human blood rather than the sun’s rays) or in ‘Fürchtenmachen’ (‘Frightening’) from Kinderszenen. Such things lead to a more oblique sense of desolation in Janáček’s On an Overgrown Path, the very title evocative of the past, of a time long eclipsed by bitter adult experience; reflections of despair rather than tranquillity. Janáček’s failed marriage, his unrequited passion for a younger woman and the death of his daughter Olga at the age of 20 are all mirrored in music of the darkest introspection. Of On an Overgrown Path, Janáček wrote ‘they are of all things most dear to me’, as if he cradled his own unhappiness. How else can you explain titles such as ‘Unutterable Anguish’ and ‘In Tears’? Such tortured music was predictably greeted with incomprehension; and, like Liszt before him (the titles of his later dark-hued utterances, ‘Nuages gris’, ‘Unstern’ or ‘La lugubre gondola’ tell their own tale) or Fauré after him, his profoundest creations were ignored, causing him serious doubts. Thus, he wrote, ‘I no longer saw any worth in my work and scarcely believed what I said. I had become convinced that no one would notice anything.’ Admirably described (by the Janáček scholar John Tyrrell) as ‘some of the profoundest, most disturbing music that Janáček had written, their interest is quite out of proportion to their modest means and ambition’. Again, these are pieces ‘which begin disarmingly but are emotionally derailed within the briefest of spans’.

Hamelin’s subtle inflection captures all of the opening ‘Our Evenings’, his nuance and musical breathing somehow beyond such an academic term as rubato, the sudden disruptions like flashes of anger flawlessly contrasted. Time and again he makes you think vocally, of the range and flexibility of a great singer. Hear him drop from mezzo-forte to pianissimo despondency in ‘A Blown-Away Leaf’, a retreat as it were from Dylan Thomas’s ‘Do not go gentle into that good night’. He is no less sensitive to the polka of ‘Come With Us!’, a brief memory of Moravian folk dance and happier times. Again, it would be difficult to imagine a more lucid yet evocative sense of ‘The Frýdek Madonna’, with its grave chorale offset by mystical shimmering. Hamelin makes the limping steps of ‘Unutterable Anguish’ like a prophecy of Debussy’s painful progression in ‘Des pas sur la neige’ (Préludes, Book 1), while in the octaves of ‘In Tears’ lies an uncomfortable awareness of the contradiction behind an outwardly conciliatory conclusion.

Turning to Schumann, Hamelin is no less illuminating than in his previous recordings of music where poetry and introspection are combined (Fantasie, Carnaval, Etudes symphoniques, etc). In Waldszenen and Kinderszenen, inwardness and an interior magic are only occasionally contradicted with extroversion; there is more of Eusebius (the man of dreams) than of Florestan (the man of action) and so, once more, the emphasis for the pianist is on a primarily interior world. How often have you heard the entrance (‘Eintritt’) to Waldszenen played with such poised rhythmic life or listened to the quizzical song of the ‘Vogel als Prophet’ (‘Prophet bird’) with such a great awareness of its oddity? Here, once more, the knife-edge between composer and interpreter, between creator and recreator is held in the finest balance. And you could hardly wish for a greater sense of wonder in Kinderszenen’s opening ‘Von fremden Ländern und Menschen’ (‘Of foreign lands and peoples’) or a more unfaltering poise in the concluding ‘Der Dichter spricht’ (‘The poet speaks’).

Writing to his beloved Clara regarding Kinderszenen, Schumann told her, ‘you will have to forget you are a virtuoso’. On the contrary, and returning to my opening proposition, Hamelin shows that he is a virtuoso in another and richly inclusive sense.