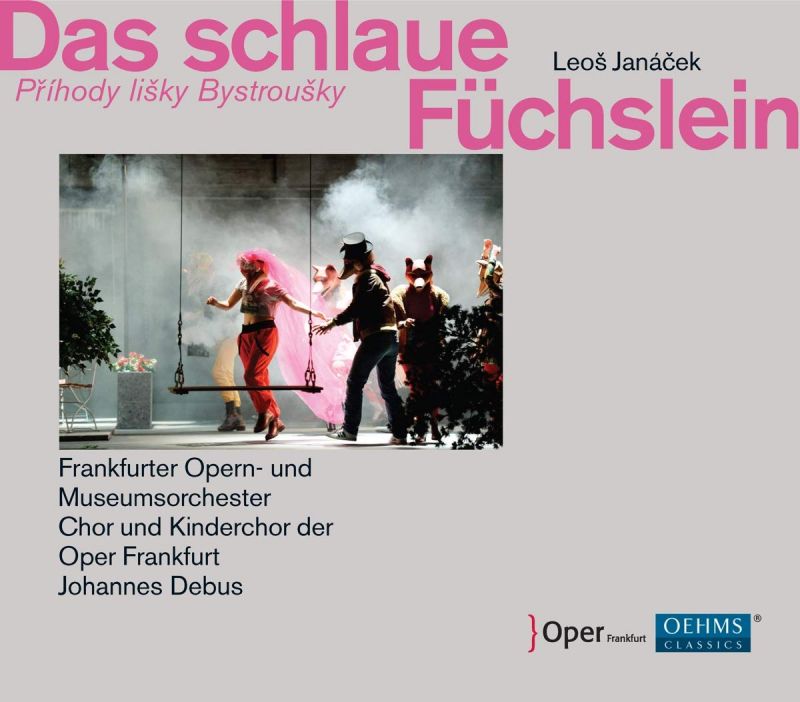 Plenty of live performances, a handful of DVDs – but the long-term presence in the record catalogues of two much-admired sets by (largely) British-based conductors (Mackerras on Decca, Rattle on Chandos) seems to have deterred modern successors. This belated Oehms appearance – with plenty of Anglophone singers in the cast – is a natural candidate for their Frankfurt Opera series of leading music-theatre works.

Debus leads a sprightly, well-integrated performance whose lightness makes an attractive and idiomatic contrast to those two older recordings. He is not afraid to vary his tempos in keeping (presumably) with an interesting-looking stage production that sometimes dresses the animals as human beings. Nor does he shy away from the score’s many darker corners, like the music surrounding Harašta’s shooting of the Vixen, or the quite epic – but never unnecessarily grand – evocations of nature and time passing. Or the (less tonal) passages, recalling contemporary composers Richard Strauss and Berg, that accompany the Fox and the Vixen getting together.

Debus’s interpretation is matched by the audibly cheeky youth of Alder’s Vixen and Carlstedt’s bold Fox, roles that may often sound too mature but are here projected with text-conscious clarity and the right injection of comedy where necessary. And Neal’s Forester and the locals in and around the inn are not the over-mature vocal greybeards sometimes heard. Neal manages a fine balance of non-sentimental emotion as he takes on board the changes in his life and the loss of both the Vixen and dream girl Terynka. The impression thus given of the work as a chamber opera not deliberately blown up to ‘grand opera’ size suits the piece well and is matched here by preservation of an ideal stage/pit balance. No voice is covered, none of Janáček’s exceptional wind and brass detail is lost and the punctuating timpani are especially clearly recorded.

This standard of performance is unfortunately not matched by a poor booklet. No English translation of the libretto is given and the German one admits it is based on the performance’s surtitles and omits much of the stage directions. Moreover, the English translation of the artists’ biographies is stilted and unidiomatic and the Badger that the Vixen expels from his sett in Act 2 has been forgotten altogether in the cast list. A pity. But for the discs themselves a warm and competitive recommendation.