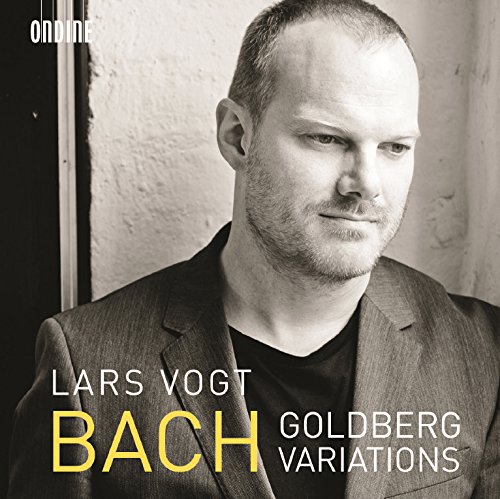 I’ve enjoyed this disc a lot and return to complete playings of it with pleasure. That says much about the way Lars Vogt has responded to the overarching quality of the Goldberg Variations as a 75-minute continuous piece, with its astonishing variety of mood, rhythm, style and sonority. He has taken his time over adding it to his repertoire, as he does with everything. In an interview that provides the text for the booklet, it’s clear he has not wanted to impose himself, but for Bach’s most demanding keyboard work to come to him. This is not false modesty: he is a personable player, to my mind the most interesting of current native German pianists by some distance.

You don’t get far as a player of this great piece without mastery of your instrument, and I’m sure all the pianists and harpsichordists who have set down admired versions will have shared his seriousness and humility. Yet in joining them he seems to me to bring qualities of freshness and joie de vivre to the Goldbergs that have often been much less marked. He is not reverential and he has noted – correctly, surely – how entertaining the Variations are. No tempo is prescribed for the theme – the opening Aria – so why make it an adagio, overladen with expressive weight? He has also noted the subtle connections between some of the variations, over and above Bach’s cyclic scheme of making every third one a canon: there are connections of register, and sometimes of character; and from time to time a variation will lead off as if prompted by a motif or patterning of notes in the one before. There are more obvious intensifications of mood – in Var 25, for example, in G minor, which Wanda Landowska used to describe as the ‘Black Pearl’ of the set – and of virtuoso display (Vars 28 and 29, making an inseparable pair). The continuity of Vogt’s performance owes much to his perceptiveness in these matters, and it’s obvious he has thought hard about the articulation of the 30 diverse pieces and how the judgement of pauses between them is important. The manner in which the statements of the Aria at beginning and end frame them is another consideration. And I like the fact that he doesn’t hang about. Indeed, Var 30, the last one, the Quodlibet, resounds as something joyous and culminating to an extent I found unexpected and irresistible.

‘Take more pleasure in your playing,’ Schnabel used to say to pupils inhibited by the task in hand. Vogt has observed how entertaining the Goldberg Variations are, as an exceptional creation, and we may speculate what a pleasure they must have been to write. They need not be approached as a sacred object, he seems to be suggesting, or a last will and testament; and they will perhaps speak more vividly if the player has the courage to desanctify, just a little, the monument they have perhaps become. What gravity some of the performances of the past used to have, and how interminably slow they were.

On the piano, the work appears as a transcription, of course, since it was composed for a two-manual harpsichord. You miss the harpsichord most in those brilliant running numbers that exploit the crossing of hands through the registers. Yet the modern piano is a wonderful resource of colour in Bach, as many great players from Edwin Fischer to our own day have shown. I would never pass up an opportunity to hear András Schiff, Murray Perahia, Igor Levit and Richard Goode play him. Like them, Lars Vogt uses the sustaining pedal hardly at all, and his ability to make polyphony clear and cantabile (in a ‘singing’ style, that’s to say) with the fingers alone is a model of how this should be. Bach insisted on it to his pupils and it’s often terribly hard to do, but marvellous when you can.

Ornamentation? Anything beyond what Bach notated would be an intrusion. Baroque variation is above all the art of ornamentation and here, in the representation of it at its highest point, everything is written out, every grace made manifest. Vogt mentions, in passing, his intense occupation with historical performance practice as an essential part of his preparation – just as it should be.

I like the studio recording, which has an ideal blend of clarity and warmth, and conveys the air of something live and properly ambitious. Lars Vogt is an artist with much to communicate, and this is a distinguished addition to the discography of the Goldberg Variations in all their glorious elegance.