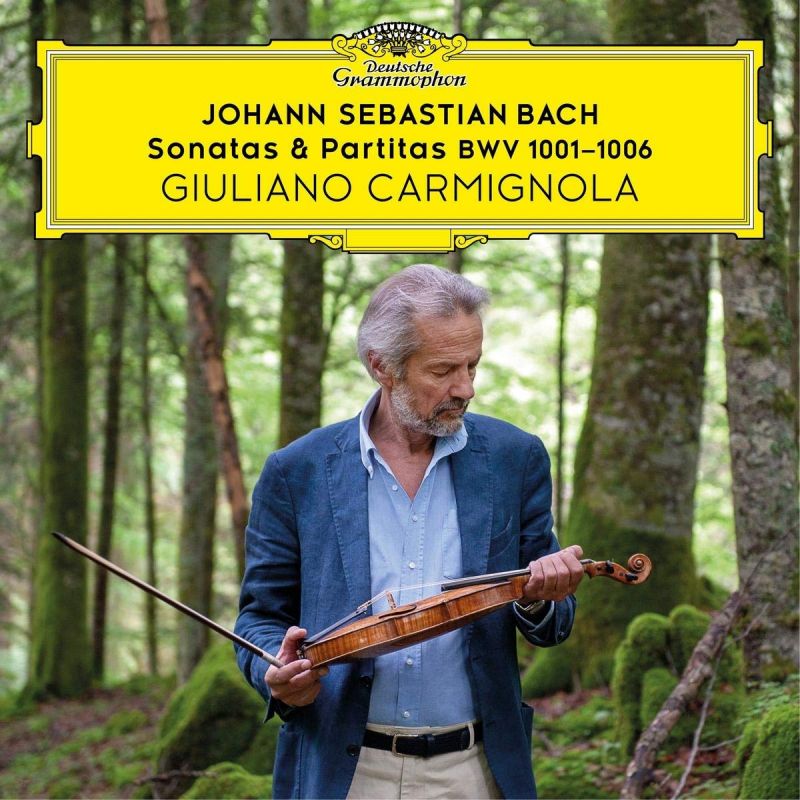 Were I to append a subtitle to this memorable album it would be ‘the art of the bow’, the reason being that although DG’s recording comprehensively reports the tonal beauty of the 1733 Guarneri violin, it’s Giuliano Carmignola’s agile use of Emilio Slaviero’s 2007 bow (after an 18th-century model by Tourte) that really grabbed my attention. By that I mean pressure, types of arpeggio and articulation, and most especially dynamics, sometimes reducing his tone to the merest whisper.

The very first track on disc 1 immediately proves the point, the Adagio from the G minor Sonata, a gentle chord, initially rising before falling on an elegant trill, and proceeding through a performance that is flexible in the extreme. Turn then to Alina Ibragimova (a player who again stresses the importance of the bow) in the same passage and purity allied to a marginally less flexible manner of phrasing reminds us of what we’re listening to, namely a ‘period savvy’ approach to Bach. With Carmignola the period-modern divide vanishes; he employs the subtlest of ornaments (often used in partita repeats), inconspicuous curlicues that adorn the line without impediment. He’ll also alter the tempo for a point that demands special attention, for instance slowing from 1'37" into the G minor Fugue before cueing the lightest and liveliest of arpeggios. And where figurations are repeated, either ascending or descending (specifically in the sonata fugues), you sense how the rhetoric is working.

Carmignola’s imaginative articulation is tellingly illustrated in movements from the Second and Third Sonatas, the fugue of the former where purposeful attack and a well-oiled legato operate simultaneously, the Largo of the latter, so utterly quiet and where chords are barely brushed. The Chaconne from the D minor Partita emerges as a dignified processional, the tempo kept steady; the use of tonal colour is acute enough to compensate for an absence of expressive vibrato. Again varieties of articulation and dynamic are significant, and how refreshing to hear the closing bars played with restraint rather than aping a ‘grand finale’. Carmignola’s mastery of tonal colouring brings a burst of sunlight to the opening of the E major Partita’s Loure and the dance movements are dispatched with panache, the sort we’re used to from Carmignola’s performances with orchestra. The recorded sound is beautiful aside from the very occasional off mic groan or ‘knock’ – very distant, but if I don’t mention it someone else will.

This for me is a definite first choice among period-instrument recordings of these works, in spite of strong competition from, in particular, Rachel Podger. DG here maintains the gold standard that it has already established with Nathan Milstein, Henryk Szeryng and more recently Hilary Hahn, very different of course: they represent, in their different ways, the much-vaunted ‘old guard’. One also mustn’t forget the excellent Ibragimova and Ning Feng; but how inspiring to at last have access to a period recording of Bach’s solo violin works that is on the same exalted interpretative level as the masters of yore.