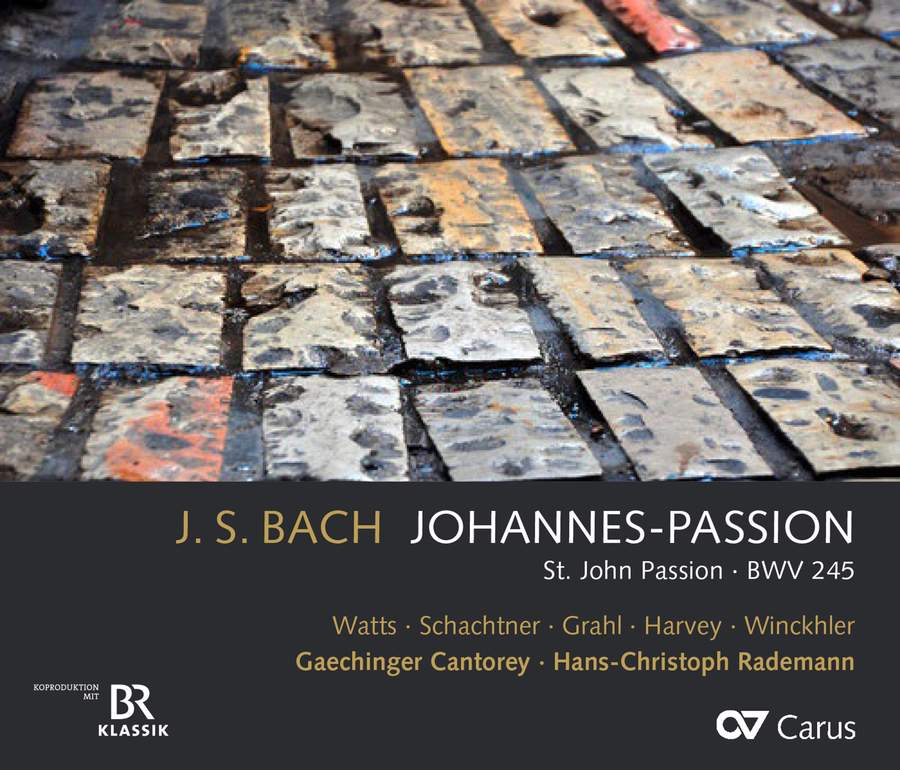 Gaechinger Cantorey, the choir and orchestra of the Internationale Bachakademie Stuttgart, opt for the 1749 revision of the St John Passion. Essentially Bach’s final version returns to the same numbers as the original 1724 score (without any 1725 substitutions) but the words of a few numbers are altered; there are two unison flutes in ‘Ich folge dir gleichfalls’ (rather than just one) and a pair of muted violins (instead of violas d’amore) in ‘Betrachte, meine Seel’ and ‘Erwäge’ (now given the different text ‘Mein Jesu, ach!’); archlute is eliminated; but now there is contrabassoon.

‘Herr, unser Herrscher’ launches with a compelling fusion of tension and clarity; two harpsichords, chamber organ (a replica of a Silbermann) and resonant orchestral bass instruments propel the roots of the twisting contrapuntal invocation with dramatic firmness. The 25-strong choir sing with precision, immaculate diction and discipline, and Hans-Christoph Rademann’s sagacious direction nurtures timbral flexibility so that there is muscle and intensity in the turba scenes but also fulsome reflectiveness in chorales (some of them arguably a touch over-interpreted); the depth of instrumental and choral sonorities in ‘Ruht wohl’ has grave profundity.

The principal soloists are kept entirely separate from the choir. Evangelist Patrick Grahl narrates emotively, interacts seamlessly with Peter Harvey’s serenely authoritative Christus and sings the tenor arias with grainy eloquence; ‘Ach, mein Sinn’ (the strings driving forwards with intensity) comes across more persuasively than ‘Mein Jesu, ach!’, in which hard-edged singing makes an uneasy bedfellow for purling muted violins. Benno Schachtner’s emphatic treatment of passing moments means that phrases are not sustained in ‘Von den Stricken meiner Sünden’, but ‘Es ist vollbracht’ is sung sublimely in dialogue with Sarah Perl’s viola da gamba (the cello and double bass playing the continuo bass line in octaves combined with the organ realisation generates sorrowful density). Elizabeth Watts’s dark-hued power means that ‘Ich folge dir gleichfalls’ is an expression of ardent strength, and ‘Zerfliesse, mein Herze’ is starkly emotional rather than merely beautiful (and the assorted concertante instruments play wonderfully). Matthias Winckhler’s open-hearted ‘Betrachte, meine Seel’ is accompanied by vivid contrabass and gently bubbling organ; his bluff and hearty ‘Mein teurer Heiland’ is a bold counterfoil to the choir’s soft interjections. Rademann’s cultivation of searing textures and fruity solo singing may not offer perfect answers to every question raised by the work, but no single interpretation ever does.