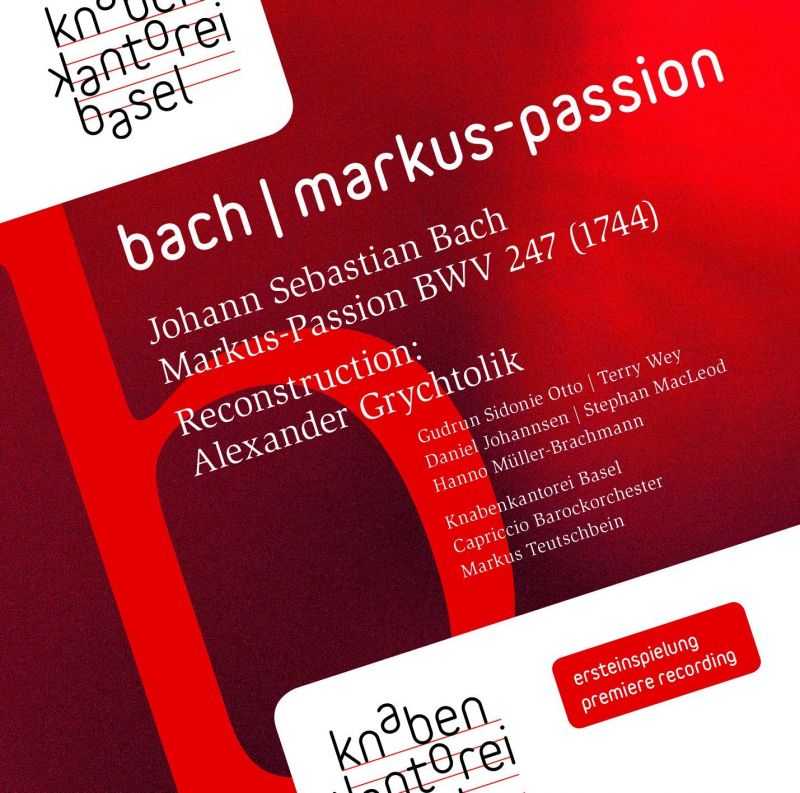 Picander’s libretto for the St Mark Passion was published in his edition of collected poetry (1732). Bach’s lost setting was probably performed on Good Friday 1731 but its musical content might have included parodies of five numbers from the Trauer Ode (which also has verses by Picander) and an aria from the alto solo cantata Widerstehe, doch der Sünde (Weimar, c1714). Markus Teutschbein conducts a new reconstruction that takes into account the recent discovery of a later libretto that originated from a revival in 1744. Each part of the oratorio features an additional aria text, which the editor (and harpsichordist) Alexander Grychtolik claims reveals the composer’s ‘search for a better balance of the movements’. Otherwise, the reconstruction follows the path of most predecessors with regards to choice of parody sources for arias; but Grychtolik also uses some chorales collected by Bach’s pupil Johann Ludwig Dietels and models turba choruses and Christ’s recitatives on similar moments in the other Passions (which means at times an impression of pastiche is inevitable). Rondeau’s documentation neglects to include a list of sources and methods for each movement but anyone familiar with the Trauer Ode will instantly spot the opening chorus and the flute-adorned tenor aria that begins Part 2.

The 75-strong Basle Boys’ Choir lacks neither shading nor emotional engagement, but diction and clarity of counterpoint are understandably in shorter supply, especially in the reverberant wash of Basle’s Martinskirche; the small period-instrument forces of the Capriccio Baroque Orchestra are swamped in choruses. Terry Wey’s softly devout ‘Mein Heiland, dich vergess ich nicht’ (with a pair of rapturous violas da gamba) has rhetorical subtlety and his account of ‘Falsche Welt’ is the highlight of the reconstruction; Teutschbein’s reduction to solo five-part strings and adoption of a clipped staccato approach to the repeated quavers in the bass-line are both effective. Gudrun Sidonie Otto’s forthright yet delicate ‘Er kommt, er ist vorhanden’ has a few scrappy moments from the strings that the acoustic helps to soften. Daniel Johannsen’s honeyed voice makes him an endearing Evangelist. The fanfare heralding this set makes a mountain out of a molehill but this interesting project sheds a little bit of new light on Bach’s enigmatic St Mark Passion.