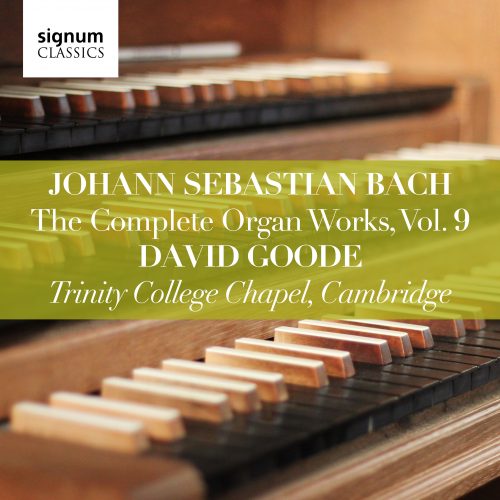 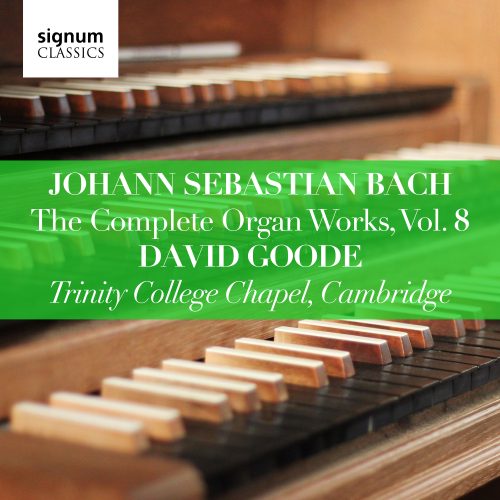 Having safely passed the halfway point of his 15-disc traversal of the complete Bach organ works for Signum Classics, David Goode continues to delight and edify in equal measure with this worthy project, which also marks the 40th anniversary of the installation of the Metzler organ in the chapel of Trinity College, Cambridge. Player and instrument are both on top form.

Vol 8 opens in fine style with a sweeping rendition of the Dorian Toccata and Fugue. In the toccata semiquaver figuration is kept clear and light, with an occasional pleasing extra mordent thrown in to keep the listener on their toes. The broad and stately Fugue flows its steady course to a mighty conclusion. A pair of manual-only chorale preludes then clears the air for the fourth Trio Sonata in E minor, with its syncopated opening Vivace, floating central Andante (exquisitely registered) and jaunty minuet finale. The flourish some Prelude BWV568 shows Goode’s rhetorical rubato to its best advantage and he maintains a high voltage of excitement in the outer movements of the sparkling Vivaldi concerto arrangement, BWV593. The rest of the disc is just as rewarding, especially the Trio arrangement of the G major Sonata for gamba and harpsichord, BWV1027a, and in the final Wedge Prelude and Fugue Goode really opens up the organ, squeezing as much emotional feeling from its rich choruses as possible.

Vol 9 follows in a similar pattern of judicious programming with a pair of sparkling Preludes and Fugues topping and tailing the disc. The centrepiece is the 20 minute chorale partita on Sei gegrüsset, Jesu gütig in a compelling performance, both interpretatively and in the thorough exploration of the Metzler’s colours. For me, though, the highlight of the disc is the heart-wrenching C minor Fantasia and Fugue, BWV537. Please banish all memories of Elgar’s luscious orchestration: here is the original in all its glory. In the shorter pieces one might quibble, for example, with the use of a 16ft register in the pedal part of the chorale prelude on Wir glauben all’ an einen Gott, BWV740, but this series is notable for the flair, clarity and spontaneity that Goode brings to this timeless music. Beautifully recorded, both discs deserve the widest currency.

Choral Preludes from the Kirnberger Collection

Concerto for Organ and Strings No. 3