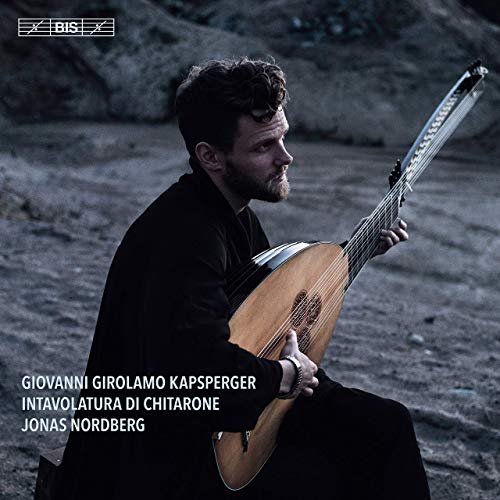 In his Musurgia universalis, sive Ars magna consoni et dissoni (1650), that wildly imaginative polymath Athanasius Kircher all but proclaims Giovanni Girolamo Kapsperger (c1580-1651) the Apollo of the theorbo, such is his unqualified endorsement of the Italian composer and lutenist’s talent and originality. It’s hard not to agree with him. That Kapsperger’s music for solo theorbo, or chitarrone, is – if you’ll forgive the pun – endlessly captivating is due to its strangeness as much as to its beauty.

Indeed, taking Kapsperger’s toccatas alone, one recalls Kircher’s own bizarre, wide-ranging publications, all but Wunderkammer in print. The sudden shifts in mood, in rhythm, in tonality, in texture, often within a very short time frame, by turns bewilder and beguile. Especially when performed by a fine musician such as Jonas Nordberg, who even manages to remind us that the music of Kapsperger’s contemporary Frescobaldi is never far away. Norberg focuses on the quasi-autobiographical late works of Kapsperger’s Libro quarto d’intavolatura di chitarrone (1640), contrasting these with music from the composer’s first book of pieces for chitarrone, published some 35 years earlier.

The opening work, the Toccata primo from the fourth book, is labyrinthine, not because of any arcane counterpoint but owing to the alarming attenuation and compression of time itself, through rapid, serpentine figurations and slow, stately progressions, and everything in between. There follow equally novel passacaglias, galliards and other dances, an air and variations … even an actual self-portrait, Kapsperger. Upon all these Nordberg, playing a darkly pungent 14 course theorbo by Lars Jönsson after Tieffenbrucker, lavishes a rare artistry that not only Kapsperger but Kircher would surely have appreciated.