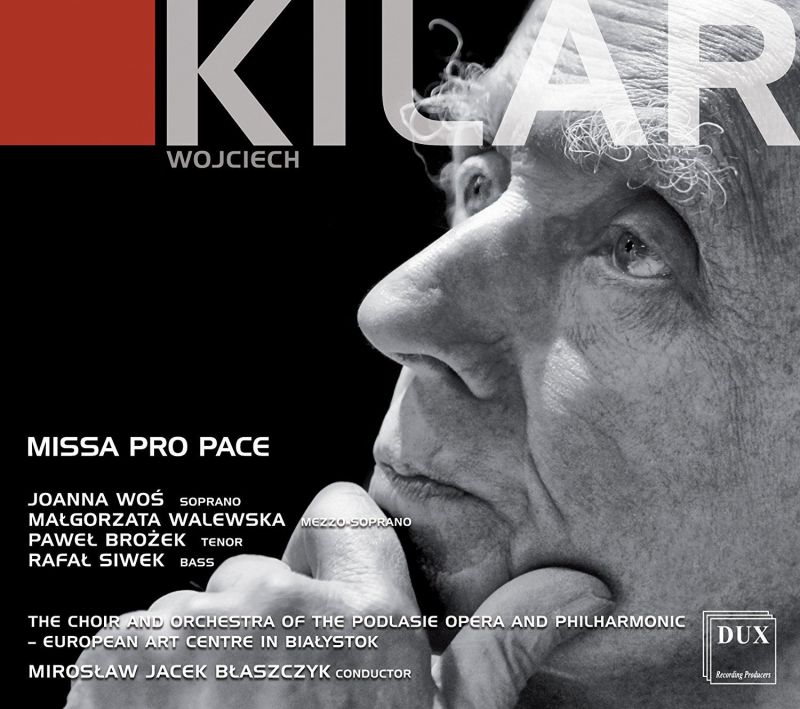 Wojciech Kilar’s music may be known to you even if you do not know his name, since he wrote scores for films by Polanski and Coppola, not to mention a vast number of films made in Poland, but his concert music has not really travelled outside his native country. Like Górecki, he moved from being a composer who made use of the latest avant-garde techniques to one who preferred a greatly stripped-down language, and his large-scale choral and orchestral works ought to find a ready audience among admirers not only of Górecki but also of late-period Penderecki.

The Missa pro pace was written in 2000 to commemorate the centenary of the Warsaw Philharmonic. It is an emotionally charged work, beginning in the depths and gradually moving towards light (the dark background provided by cellos and double basses is a Kilar trademark). The light in this case is slow to dawn: the imploring Kyrie is relentlessly black and the atmosphere only changes with the bustling Gloria. It is quite clear that the music’s whole impetus is the movement towards the final words of the Agnus Dei, ‘Dona nobis pacem’. The multi-sectional Agnus Dei, at nearly 20 minutes, is the longest movement of the work.

Kilar himself considered the work to be simple, medieval in character, and there are moments that do indeed suggest this – apart from the simplicity of the final section of the Agnus Dei, there are the homophonic a cappella ‘Qui tollis’ section of the Gloria and most of the Credo, for example – but it is nevertheless imposing and frequently majestic. The performance is one of absolute conviction; my only complaint would be that the vibrato of both soprano and mezzo-soprano soloists (Joanna Woś and Magorzata Walewska respectively) is a little overwhelming at times, but this is merely a detail in this luminous recording.