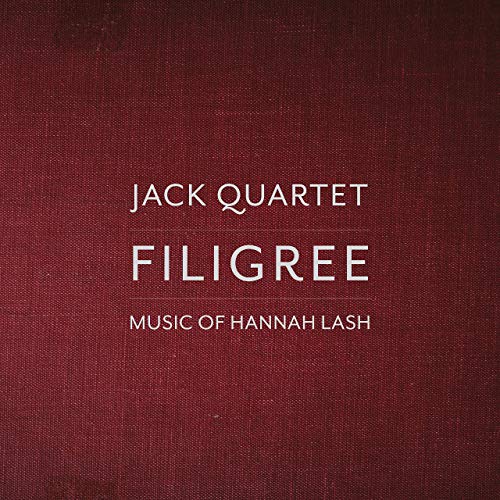 The Jack Quartet continue to set the pace in terms of expanding and promoting the string quartet repertoire, their latest release offering an overview of the American composer Hannah Lash – now in her mid-thirties and a significant figure on the new music scene of the East Coast.

Of the three quartet works, two are concise single movements. Frayed (2009) is an arresting study in the control of tension and release, whereas Pulse-space (2014) was conceived with choreography and explores the interface between pulses of harmonic and rhythmic derivation. Among those six Baroque dance forms that comprise the Suite: Remembered and Imagined (2013), most distinctive are a ruminative Sarabande and a ‘Minuet antique et fragile’ whose wistful strains venture far from the formal archetype though remaining faithful to its spirit.

Most substantial is Filigree in Textile (2011), the string quartet partnered by harp across three movements inspired by medieval tapestry in its musical as well as textile aspect. Central to this is the harp’s role – whether punctuating the contrapuntal interplay of ‘Gold’ or resonating between the sombre dance tropes of ‘Silver’, before emerging as first among equals with the fantasia-like unfolding of ‘Silk’, which gradually takes on an almost Debussian air of fluidity and elegance. The composer herself takes on this concertante part with understated authority.

Throughout, the Jack players give of their collective best and while the sound might be thought too closely balanced, its sheer immediacy audibly plays to the strengths of often visceral music. Succinctly annotated, this will for many be a timely introduction to a significant composer.