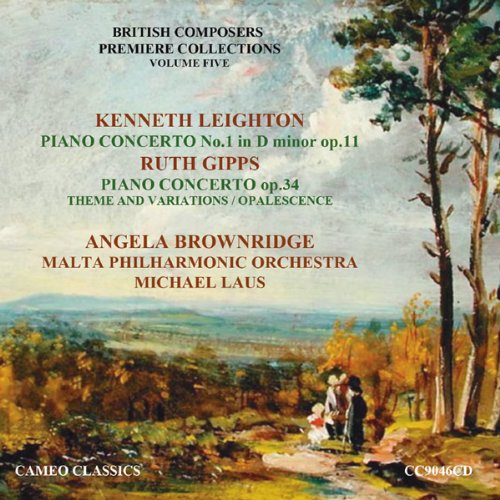 More gaps in the catalogue valiantly plugged by Cameo Classics. Angela Brownridge has already proved an assiduous champion of her teacher Kenneth Leighton (1929 88) with a magnificent three-disc survey of his solo piano output for Delphian. She brings to the first of Leighton’s three concertos for the instrument (composed in 1951) both heart-warming conviction and swaggering verve. An accomplished, strongly communicative discovery it comprises, too, whose youthfully ebullient outer movements are counterbalanced by the bittersweet tread of its cloud-hung centrepiece. The hard-working Malta PO under Michael Laus are at times pushed beyond their means but the performance as a whole is convincing enough. Perhaps Chandos will also treat us to a recording in due course.

The remainder of the disc is devoted to Ruth Gipps (1921 99), who enjoyed early success as both a pianist and composer (she later took up the baton, as well as founding the London Repertoire Orchestra in 1955). Her Piano Concerto dates from 1948 and leaves an engaging impression – dashingly romantic, consistently songful and agreeably good-humoured, with a captivatingly fragrant slow movement to commend it. Suffice to say, Brownridge is again on sterling form, but it’s only fair to warn that the orchestra is not exactly in the luxury class. Both the solo items are also worth getting to know, particularly the serene and enviably concentrated Theme and Variations. Admirable sound here, too, conspicuously more refined and palatable than in the orchestral offerings. Any misgivings aside, this remains a courageous and valuable issue.

Concerto for Piano and Orchestra No 1

Theme and Variations for Piano