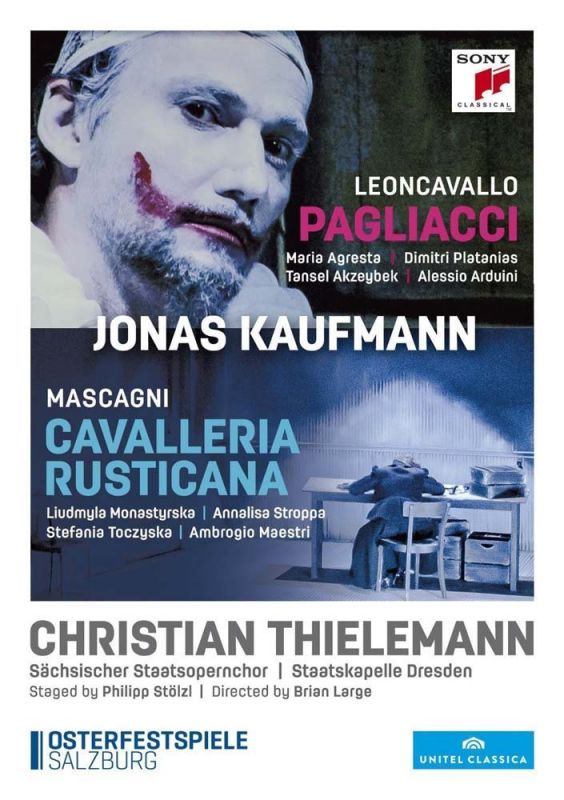 This new Cav and Pag is doubly treasurable. Not only – as the label’s blurb loudly but rightly proclaims – does it capture Jonas Kaufmann singing both Turiddu and Canio for the first time in this 2015 Salzburg Easter Festival production, but the tenor also sings them fabulously well. Once we get beyond Tiriddu’s song to Lola, delivered instrospectively but – in the context – effectively on stage, there’s none of the self-regarding over-interpretation that for me can mar Kaufmann’s performances in the theatre (although many prize his mezza voce more highly than I do). Instead we have plenty of the thrilling, untrammelled and ringing sound that the tenor is capable of at his best, with no loss of sensitivity in terms of musicianship or acting.

Happily, Kaufmann’s outstanding central performances are well matched, both musically and scenically. Philipp Stölzl’s production captures something of the expressionist feel and period of early German cinema – and in so doing also underlines the parallels between that stylised aesthetic and that of commedia dell’arte, exploited in Leoncavallo’s work. He directs everyone skilfully and makes ingenious use of a compartmentalised design in each work – six boxes, three across and two down, that can function independently, sometimes to have filmed close-ups projected onto them. It’s an impressive effect that’s very well captured in the video direction.

There are pros and cons to the concept, inevitably, and the cool palette of colours in Cav, in particular, reflects little of the drama’s sun-baked atmosphere and attendant hot-blooded passions; a heady air of easy rusticity is replaced with a sense of heavy industrial smog. The Alfio-as-gangster conceit is more believable (thanks largely to Ambrogio Maestri’s larger-than-life portrayal) than the idea of Mamma Lucia as a sort of town clerk. But we get an unexpected level of detail in the characterisation, particularly when it comes to the depiction of Santuzza and Turridu’s domestic situation: a quiet, pervasive sadness hangs over their urban garret, into which Stölzl has added a choirboy son. It all helps make the two main characters more than just embodiments, respectively, of jealous womanly vengeance and immature macho irresponsibility and narcissism; Liudmyla Monastyrska’s Santuzza, sung with rich and generous tone, is especially moving. The filmic nature of Stölzl’s vision, meanwhile, serves to alter one’s perception of Mascagni’s episodic score by cleverly aligning its gearshifts with scene changes.

Pagliacci feels more conventional, with Canio’s troupe bringing muted colour to the same worn-down world. Again there are pros and cons. Stölzl elicits a terrific central performance from Kaufmann once more: his clown comes across as threatening, short-fused and world-weary from the start – given an extra edginess by the addition of a Mephistophelian goatee – and he turns in a towering performance of ‘Vesti la giubba’ as one long crescendo. But I was less keen on the crowd milling around during Tonio’s Prologue (its members distractingly singled out in the camera direction), and it’s a shame that Stölzl’s arrangement for the play-within-the-play sets up no fourth wall for Canio to tear angrily down at ‘No, pagliaccio non son’ – watch Vladimir Galouzine in Giancarlo del Monaco’s Madrid production (Opus Arte) to see how shockingly visceral this moment can and really should be.

But, on his own terms, Stölzl creates a drama of real intensity. Maria Agresta is a fine, exciting Nedda and Dimitri Platanias sings eloquently as a subtly malevolent Tonio. Alessio Arduini’s Silvio is pleasingly mellifluous, and his duet with Nedda, played out in a line-drawn expressionist landscape, is happily uncut – though the hurried removal of his shirt at the start of it strikes me as inconsistent with the production.

Underpinning the whole enterprise is the luxurious support of Christian Thielemann and his Staatskapelle Dresden. There’s a grandeur and sumptuousness to the sound and an occasional expansiveness to the conducting that are some way from being authentically Italianate, perhaps, but Thielemann is always aware of the drama and the beauties of the playing are many – the gentle way he has with Cav’s famous Intermezzo is understated, for example, but no less moving for it.

Maybe stick with Del Monaco’s staging in Madrid for a more conventional modern version of both works, but this new account, built around two of Kaufmann’s finest performances, is compelling and fascinating. Highly recommended, especially at Sony Classical’s low price