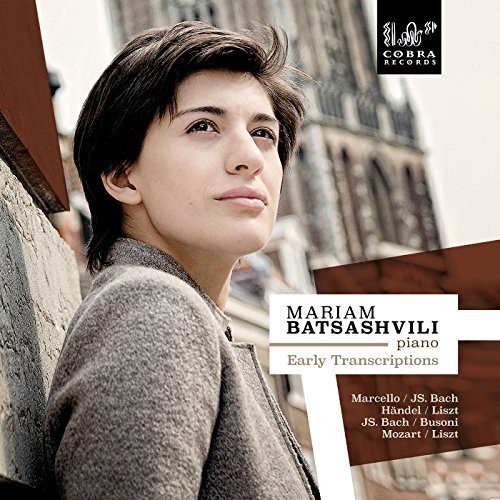 Georgian-born Mariam Batsashvili won first prize at the 2014 International Franz Liszt Competition in Utrecht, the first female artist to carry off the trophy; and in her debut recording (disregarding a disc of performances from the competition) she lives up to that billing. Admittedly these somewhat curiously titled ‘Early Transcriptions’ absolve her to a degree from interpretative responsibility, since that job has already largely been done by the arrangements themselves. But she undoubtedly shows the requisite agility and range of touch and temperament that establish trust in her artistry.

The Marcello is by no means an obvious choice. True, its slow movement used to be a favoured encore piece. But there is little a pianist can bring to the fast outer movements beyond level-headed musicianship, as Batsashvili offers here. Nor is the Handel/Liszt Sarabande und Chaconne exactly an attention-grabber, with Liszt in comparatively restrained mood. The Bach-Busoni Chaconne is at the other extreme, of course – the acme of attention-seeking. If Batsashvili doesn’t embrace its gothic excesses as wholeheartedly as certain virtuosos of yore, that may actually be a bonus for some listeners. Similarly, the Mozart/Liszt/Howard conflation is carefully and persuasively unfolded but without the full monty of abandon and calculated tastelessness it invites (demands?). All fair enough for a debutante, you might say.

The rather airless acoustic gives a feeling of listening forensically in a classroom rather than in the warm, communicative environment of a concert hall. I do look forward to hearing Mariam Batsashvili in the future but she deserves more sympathetic recording.