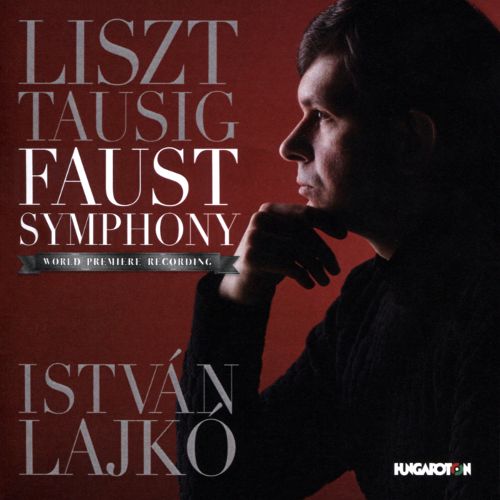 The hotbed of creativity that surrounded Liszt in Weimar between 1848 and 1861 is difficult to imagine today. Embarking on the most fruitful stage of his career as a composer, Liszt was also producing and conducting works by his contemporaries and predecessors, writing polemics in support of new music and decisively shaping the careers of a handful of talented young artists. His most prized pupils in those years were Hans von Bülow of Dresden and Carl Tausig, who, at the age of 13, arrived from Warsaw and remained with Liszt in Weimar until 1858. Something of the spirit of that special place and time is captured in this remarkable release of Liszt’s A Faust Symphony, transcribed for solo piano by the 16-year-old Tausig and recorded for the first time by the Hungarian pianist István Lajkó.

The transcription itself is something of a marvel. Tausig’s renderings of Liszt’s two symphonies and a number of the symphonic poems survive in various states of completion. In the case of Faust, the second movement, ‘Gretchen’, remained fragmentary in Tausig’s manuscript. However, remedy is provided by Liszt’s own 1867 solo arrangement of the movement. Overall, compared with later transcriptions of Liszt’s orchestral music by Stradal, Klauser, Stark and others, Tausig’s Faust is in a class by itself. Its resourceful evocations of complex orchestral textures are boldly original and unfailingly pianistic, exploiting the instrument’s potential without exceeding it. Meanwhile, the virtuoso demands made on the pianist over the course of nearly an hour and a quarter are formidable.

These are admirably met in Lajkó’s reverent, imaginative and thoughtful performance. His inerrant sense of pacing charts the narrative thread through the individual movements even as it throws Liszt’s towering architecture into vivid relief. The ominous sense of ambiguity created by the opening measures’ augmented triads, so prominent in the ‘Faust’ movement’s orchestral garb, here permeates the entire symphony. Faust’s despair, ambition, courage and corruptibility are conjured by a keen delineation of the thematic material, subtle articulation, an acute rhythmic sense and an exquisitely blended colour palette. The portrait of Gretchen is a well of purest water, pellucid textures, delicate and longing. And, as you wonder what could possibly be left, Lajkó ratchets into yet higher gear for a lurid ‘Mephistopheles’, whose mockery becomes, in the tremendous fugue, menacing. Finally he succeeds in what eludes many conductors: a credible and perfectly calibrated transition to the ‘Chorus mysticus’, which in turn spirals upwards, transfigured and serene, to the ethereal realms.

This is heady stuff. With genuine understanding and astonishing confidence, Lajkó pulls off what surely will be considered a career-defining achievement. Hungaroton’s presentation is at one with the performance. The engineers have encompassed Lajkó’s infinitely varied yet always natural piano sound in beautiful detail. Zsuzsanna Domokos explores the story of this little-known manuscript in a compelling booklet essay.

Despite his early death, Tausig’s position in the history of pianism has never been in doubt. Joachim called him ‘the greatest pianist before the public today’ and Liszt considered Tausig the most talented of all his pupils. Experiencing Lajkó’s superb realisation of Tausig’s brilliant transcription removes any sense of hyperbole from those encomia.